Film: Joy House based on a Day Keene novel

“Joy House,” a French thriller from 1964, is the story of a gigolo and con man, played by Alain Delon, who beds the wrong wife enraging her gangster husband who dispatches a crew of bad guys to find and kill Delon. They nearly catch him before he finds refuge in the secluded mansion of a wealthy and beautiful woman, played by Lola Albright, and her younger cousin, played by Jane Fonda.

This 97-minute movie has a fast-paced and intriguing opening, followed by an exciting chase, but then falls into a boring story of Delon hiding out in Albright's mansion on the Riviera with Fonda sexually tempting him in all their scenes together. The bad guys eventually catch up with Delon again, restoring the pace and excitement to the story. There are also some odd and loopy touches and a twist that would make the movie worth watching if it had not induced an hour-long nap in the middle.

The picture was filmed on the Riviera in black and white. Perhaps that choice was for budget reasons, otherwise why shoot the beautiful scenery in anything but color?

“Joy House” was directed by Rene Clement, who four years earlier directed the excellent “Purple Noon,” with Delon from a novel by Patricia Highsmith.

The script for “Joy House” was by Clement and Pascal Jardin based on a novel by Day Keene, with dialogue by Charles Williams.

The photography was by Henri Decae, who filmed many of the French New Wave films as well as thrillers by Jean-Pierre Melville. 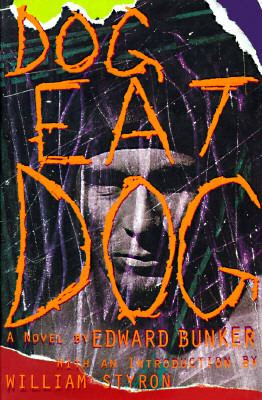 In Edward Bunker’s 1996 crime novel, Dog Eat Dog, three career criminals approaching middle age set out to score big money by ripping off drug dealers and other bad guys who, while dangerous, cannot report the thefts to the cops.

Troy, Diesel and Mad Dog have given names, but those are the names they go by and are known by in their world of violent criminals. They met years earlier in reform school and became wary friends. The three of them have been in and out of California institutions, jails and prisons most of their lives. Now, Troy, the latest to be released back into society, plans to get his hands on a lot of money, enough to disappear and never commit a crime again. To do this, he needs Diesel and Mad Dog as partners.

Diesel, with a wife, a child and a house in the suburbs, has begun to live in both the world of crime and the straight world. A big man, he earns by being the muscle for a local mob guy, dishing out beatings and destroying property. But Diesel has qualms about getting involved in Troy’s plans. His biggest concern is the third man on the team.

Mad Dog is a wiry killer with no conscience and a severe drug problem, but he will do anything Troy tells him to do.

While the book rambles a bit at the beginning, setting up the situation, the sense of authenticity is on every page and Bunker knows what is authentic. The author spent time in reform schools and state prisons. While incarcerated he began reading, and then writing. Bunker knows the criminal world, he knows how it works, he knows how it sounds, and he knows how men like Troy, Diesel and Mad Dog think. Once he gets those three together the story quickly gets down to business and reads like a great thriller.

(I would like to thank Col of Col’s Criminal Library for pointing the way to this book.) 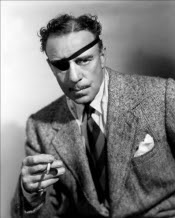 This March 17, give John Ford’s “The Quiet Man” a rest and check out three movies by another Irish-American filmmaker from the Golden Age of Hollywood.

Raoul Walsh was born in 1887, grew up in New York City, traveled the country working various jobs, took up acting, landed in Hollywood, became D.W. Griffith’s assistant, started directing his own films in the silent era, and continued making movies from the 1920s to the 1960s.

He directed dozens of films in all genres, but was best known as a master of action, and today is remembered for his gangster films, “The Roaring Twenties,” “High Sierra,” and “White Heat.”

Of all his films, three in particular are urban, comedy-dramas set in the 1890s, the era in which Walsh was coming up. Regardless of the cities or the characters’ names, these three movies are Irish films as filtered through Walsh’s own memory and background.

The films are: “The Strawberry Blonde,” “Gentleman Jim” and “The Bowery” 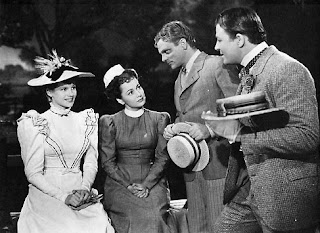 “The Strawberry Blonde” from 1941 stars James Cagney as Biff Grimes, a local roughneck with ambitions to become a dentist and dreams of dating Virginia, a neighborhood beauty, played by Rita Hayworth. Olivia de Haviland plays Virginia’s good friend, Jack Carson plays Hugo, the loud, scheming climber and manipulative friend of Biff’s. The film is a small, fast-paced story with plenty of fisticuffs and humor – much around Biff’s correspondence school dentistry courses and his homework on his father, played by the exuberant Alan Hale. “The Strawberry Blonde” also has an underlying gentleness and loving memory, but it never slips into mawkish sentimentality. 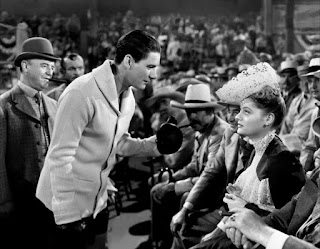 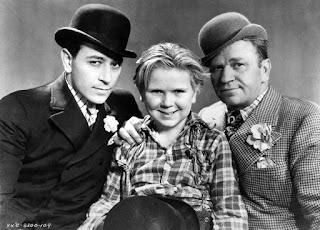 “Gentleman Jim” from 1942 is a bigger picture with Errol Flynn playing early professional boxer, James J. Corbett. Corbett was a real person, but most of the film is a fictionalized account of his rise from cocky bank clerk to champion. Like “The Strawberry Blonde,” “Gentleman Jim” is fast paced-fun with the Warner Bros. stock company supporting Flynn, including Jack Carson as his buddy, Alan Hale as his father, Ward Bond as the famous champ John L. Sullivan, and Alexis Smith as his love interest. (Why didn’t Warners team Flynn and Smith in more pictures? They are great here.)

“The Bowery” from 1933 is a film rich in detail about the once tough, flashy section of New York City when it was all saloons and gambling joints and long before it was the city’s skid row (and long, long before it became the cool, hip area it is today.) An energetic George Raft plays Steve Brodie, a saloon owner and chief of one of New York’s many then-private fire departments. Burly Wallace Beery plays Chuck Connors, a rival saloon owner and chief of a competing fire company. The story works its way up a dare between these two that Raft can jump off the Brooklyn Bridge, and live to collect the prize money. Walsh handles all the competitions and fights, the mugs and thugs with a light touch and a large dose of fond nostalgia.

So, if you can find one or all of these good old films, please take a look, and leave Sean Thornton and Mary Kate alone this year. Spend some time with the Irish Americans.
Posted by Elgin Bleecker at 10:58 AM 7 comments:
Labels: Gentleman Jim, Raoul Walsh, The Bowery, The Strawberry Blonde

A few years ago, I stumbled upon the work of Alan Clarke, a brilliant British director who made some extraordinary films.

Clarke, who died in 1990 at age 54, spent much of his career doing made-for-TV movies. But unlike the U.S. tradition of safe, formulaic stories neatly told in 90 minutes or two hours, Clarke’s work was experimental, sometimes raw, and occasionally baffling unless you caught on to his meaning.

The best example of the later is “Elephant” from 1989. This 39-minute film is a series of long-long takes of killers searching out, walking toward, and shooting their victims. After a while, the subject, the set-ups, and even the Steadicam filming technique become predictable and numbing. Clarke made the film to comment on the numbing effect the daily news of violence in Northern Ireland was having on the public.

Many of his films commented on current events.

“Made In Britain” is a 76-minute film from 1982 in which a young Tim Roth plays a rage-filled teenage skinhead.

“The Firm” is a 70-minute film from 1989 with Gary Oldman as the leader of gang of football hooligans.

“Contact,” a 67-minute film from 1985, is an oddly quiet piece about a squad of British soldiers on duty in Northern Ireland.

“Scum” is both a 78-minute TV movie from 1977 and a 1979 remake as a 98-minute feature film about a young teen in an English borstal (a tough juvenile detention center).

Each of these films are interesting, disturbing and compelling and prove that Alan Clarke was a major talent.

More about Clarke can be found on the IMDb.

A 5-disc DVD set includes “Elephant,” “Made in Britain,” “The Firm,” and both versions of “Scum.”

Some of Clarke’s work can be found on YouTube.