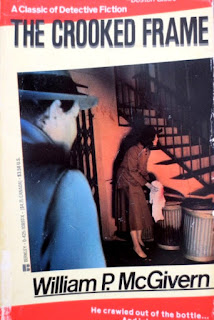 The Crooked Frame is a 1952 novel by William P. McGivern about a New York magazine editor who stumbles into his apartment in the wee hours, after a night of drinking and a brief blackout, to find his coat and shirt covered with blood. And it is not his blood.


Webb Wilson, 36, a man plagued by violent memories of combat in World War 2, drinks in hopes of finding some peace. All he wants is to live quietly, do the daily 9 to 5, and escape his haunting guilt. His boss upsets Webb’s quiet routine by uprooting him from his undemanding nook and placing him in charge of a department of quirky, off-beat characters, one of whom is murdered. The killer could be anyone on Webb’s staff, and it could be Webb himself who may have committed the crime during his blackout. As Webb pulls together the strings leading up to the murder, he begins to see that … well, McGivern’s story is too good to spoil with a lot of spoilers.


This story, told in a clean, straight forward style, is populated with well drawn, all too human characters. So well drawn are they that clues arrive almost unnoticed. McGivern also puts the reader in the uncomfortable position of wondering throughout the book whether or not Webb, the man trying to find the truth behind the murder, is the murderer himself.


Many of McGivern’s novels deal with cops and criminals, and while there is a forceful police investigator in The Crooked Frame, the focus is on Webb, his colleagues, the inner workings of the publishing firm, and the 1950s world of the three-martini lunch.


McGivern was on a roll in the 1950s. After years of newspaper reporting, writing for the pulps and a hitch in the Army during World War 2, he hit his stride when he published his first novel, But Death Runs Faster in 1948. He followed that effort with a dozen more crime novels over the next decade, including: Shield for Murder (1951), The Big Heat (1953), Rogue Cop (1954), Night Extra (1957) and Odds Against Tomorrow (1957). Many of his books were produced as films. In the 1960s and 1970s, McGivern wrote for the movies and television, while continuing to turn out novels. He died in 1982 at age 63.


The Crooked Frame is well worth the time to find and read.
Posted by Elgin Bleecker at 3:19 PM
Labels: murder, mystery, noir, Odds Against Tomorrow, The Big Heat, The Crooked Frame, William P. McGivern