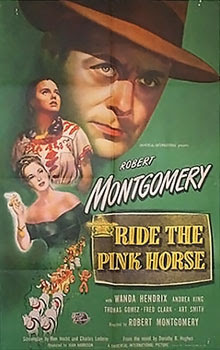 “Ride the Pink Horse” is hardly an overlooked film. Many mystery, crime and noir fans know the 1947 movie. But what may be overlooked is the work of director Robert Montgomery who also starred in the picture.

Robert Montgomery came to movies around 1929, landed featured parts in a variety of films from the prison drama “The Big House” to “Here Comes Mr. Jordan,” and many light comedies. In 1937, he starred in the suspense film, “Night Must Fall,” which would foreshadow some of the darker films he would do later in his career.

He served in the U.S. Navy during World War 2 and right after the war, starred in the excellent John Ford film “They Were Expendable,” playing the skipper of PT Boat in the Philippines.

The following year, he directed his first film, “Lady in the Lake,” from the Raymond Chandler novel. (The film was released in January, 1947.) Montgomery also starred himself in that movie, but was hardly seen on screen because of his stylish technique of using the camera as the point of view of his character, detective Philip Marlow. Montgomery was only glimpsed when he passed a mirror or a shop window. The gimmick still amuses viewers. But within the gimmick was another style Montgomery used in his next picture, “Ride the Pink Horse.” That style was the use of long scenes, unbroken by cuts. Other than Orson Welles and John Farrow, I cannot think of another director from that time who used as many extended takes. (Perhaps someone can fill in my film-history gaps.)

“Ride the Pink Horse,” adapted from the novel by Dorothy B. Hughes, is the story of Gagin, a bitter war vet who travels by bus to a town in New Mexico to catch up with a racketeer, Hugo, played by Fred Clark, who had a friend of Gagin’s killed. Gagin has a piece of evidence that could send Hugo to a federal penitentiary and he plans to squeeze Hugo by making him pay hard cash for it. But Gagin is followed by a federal agent, Retz, played by a gray haired, Southern-drawling Art Smith, who is the conscience of the film. Retz wants Gagin’s evidence to put Hugo away.

Gagin is befriended by Pancho, played by the great character actor Thomas Gomez, who operates a children’s merry-go-round in a poor section of town. Pancho not only looks after Gagin who is now chased by both the feds and Hugo’s hoods, but also takes a beating from the hoods.

Director Montgomery handles the violence by implying it rather than displaying it. His own character takes a savage beating in which he is also shot and wounded. But Montgomery shows only the aftermath in which Gagin is so dizzy, disoriented and weakened that a teenage American-Indian girl, Pila, played by Wanda Hendrix, has to nearly carry him to the safety of Pancho’s. The small, innocent, superstitious girl is another self-appointed protector of Gagin and a second conscience of the movie. At the merry-go-round, Pancho hides Gagin and takes a beating to save him. Again, Montgomery implies the violence, playing it off the reactions of the horrified children who are stuck on Pancho’s whirling ride. These scenes of violence are still effective today.

Even more intriguing than the unsavory characters and the violence was Montgomery’s use of very long takes. When Gagin arrives in town, he goes from the bus, into the station, up to some coin-operated lockers, where he stores the evidence, and then to the waiting room where he hides the locker key, all in one take. Later, Gagin meets Hugo in a night club, has words with the racketeer, then moves onto the dance floor with Hugo’s conniving mistress, played by Andrea King, and then over to a side door to have a private chat with the woman, all in one take. The movie has many extended dialogue scenes done in long takes, often filmed from behind Montgomery, as if allowing the audience to witness the scene from Gagin’s point of view.

“Ride the Pink Horse,” with a screenplay by Ben Hecht and Charles Lederer, and produced by Joan Harrison, one of the few women producers in old Hollywood, is a stylish, well crafted film, and worth a look. And Robert Montgomery, although he directed only five films in his career, should not be overlooked.
Posted by Elgin Bleecker at 11:23 AM
Labels: Ride the Pink Horse, Robert Montgomery