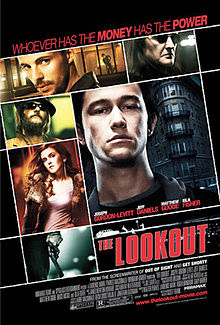 Last weekend, I caught up with a nicely done little heist movie from 2007 called “The Lookout”

In it, Joseph Gordon-Levitt plays Chris, a former high school athlete, who suffers a serious brain injury in a car crash. Employed as a night janitor for a local bank in his small, Midwestern town, he hopes his condition improves enough to get a teller’s job with the bank. But his injury makes that goal nearly impossible since his short-term memory is damaged.

Some local dirtbags get the bright idea of befriending Chris and recruiting him to help them rob the bank.

This deliberately paced movie is quite involving as we get to know more about Chris’s guilt at causing the car crash which killed and injured his buddies and girlfriend, and his frustrations with his current condition.

There are two outstanding supporting characters in the picture. One is the blind man, played by Jeff Daniels, who shares his apartment with Chris and who helps Chris with his recovery. The other is the head bad guy played by Matthew Goode, who makes the initial contact with Chris and becomes his new best friend.

The cast also includes Isla Fisher as a former stripper who gets involved with Chris, and Sergio Di Zio as a goodhearted deputy sheriff.

“The Lookout” was written and directed by Scott Frank.

This 99-minute film is well worth a look.