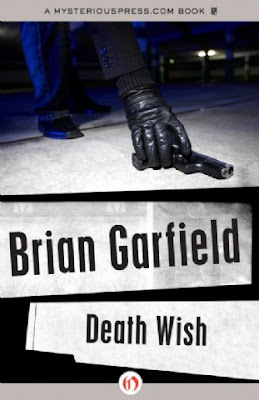 Brain Garfield’s 1972 novel Death Wish is not so much an action story as it is an indictment of a city and time when crime was increasing, people were scared, and cops and politicians were unable or uninterested in doing anything about it.

The first half of the novel focuses on Paul Benjamin’s rage and feeling of impotence after his wife and daughter are assaulted by a group of thugs. His wife dies of her injuries and his daughter is traumatized and committed to a psychiatric hospital. The cops investigating the crime have no leads and no hope of ever finding the criminals. While Paul rails against New York City’s crime problem, his son-in-law, a lawyer for a public defender’s office who spends his days in court representing violent punks, tries to calm him down.

Paul’s anger grows stronger. He is sick of feeling like a victim, cringing in fear when he walks down a dark street, and knowing hoodlums will get away with their crimes.

When he returns to work after a few weeks off, the partners in his accounting firm decide Paul needs a break from the city and send him to Arizona to work on a corporate merger. There, Paul is taken with the myth of the Old West, where a man with a gun could confront outlaws. Before leaving, he buys a revolver, hides it in his luggage and sneaks it into New York.

Now armed, Paul does not wait until he is preyed upon, he goes looking for trouble. He shoots and kills a junkie attempting to rob him, and when the sickening sensation leaves him, he has a feeling of accomplishment. Night after night, he goes out looking to repeat the incident. At first, he rationalizes the shootings by only killing those out to do him harm or in the middle of committing other crimes. Soon his actions leave him feeling nothing. He is as numb to the world as his institutionalized daughter.

A psychiatrist, interviewed in a New York magazine provides a profile of the unknown man whom the press is hailing as a vigilante and citizens are applauding for cleaning up the streets. The psychiatrist says the vigilante is a middle-aged man who has experienced a terrible act of violence either against himself or a family member and is driven by fear and a mental breakdown. The article startles Paul, but does not stop him. By the end of the book, Paul is roaming the streets like an animal, looking for his next victim.

Death Wish is provocative, but, with new fears of terrorism and mass shootings, this novel of street crime reads like yesterday’s headlines.