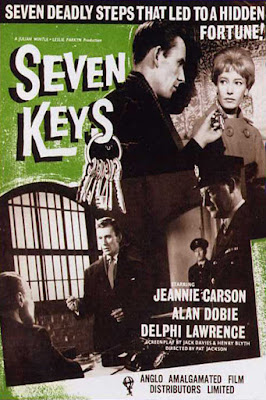 Released in 1961, “Seven Keys” is a fast-paced English crime film about a surly prisoner named Russell, played by Alan Dobie, who is informed by the warden that he has inherited a strange gift from a fellow inmate who died behind bars.

The inheritance is a ring of keys. Russell learns the old prisoner was sent to jail for embezzling £20,000. The money was never recovered and the warden, the guards, the police, and Russell suspect one of the keys will open the secret hiding place of all that loot.

Once Russell is out of the can, he goes through the keys, one-by-one, discovering what each opens. While working his way through the ring, he attracts the attention of baddies who would also like to get their hands on the cash.

This quirky little movie, with a running time of just 57 minutes, was most likely the second feature on a double bill, but it is miles ahead of the usual B-picture. The twisty story, the acting, and the visual style are well above average.

“Seven Keys” was directed by Pat Jackson, who went from making documentaries in the 1930s and 1940s, to feature films in the 1950s, to television in the 1960s and 1970s. He directed several episodes of two shows starring Patrick McGoohan – “Danger Man” (called “Secret Agent” in the U.S.) and “The Prisoner.” Both of those shows have some of the flavor found in “Seven Keys.”

The quirky, jaunty quality of “Seven Keys” with its snappy pace and eccentric supporting characters, may be the influence of producer Julian Wintle. In the 1960s, he produced all the Emma Peel episodes of “The Avengers.”

The writers on the film were Henry Blyth and Jack Davies. Davies had a long career in movies, including the scripts for the tricky Michael Caine picture, “Gambit,” and the comedy, “Those Magnificent Men in Their Flying Machines.”

This good little film is out on DVD, part of a series of box sets called "The Edgar Wallace Mysteries." But the discs are not available in a format for the U.S. and Canada.
Posted by Elgin Bleecker at 1:43 PM
Labels: Alan Dobie, British crime film, Julian Wintle, Pat Jackson, Seven Keys