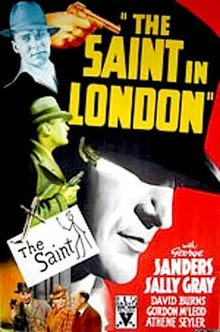 “The Saint in London” is considered the best of the seven-film series of B-movies made by RKO in the 1930s and 1940s featuring Simon Templar.

Templar, aka the Saint, was Leslie Charteris’ sophisticated thief and modern-day Robin Hood.

After watching “The Saint in London” recently, I would agree. It is the third entry in the series, the second to star George Sanders – the best Simon Templar, in my opinion – and the only one produced in England. Later Saint movies were filmed there, but of the original series, this (I am pretty sure) was the only one. All the others were made in Hollywood.

The use of actual London locations and an English cast, including a young Sally Gray as Simon Templar’s girlfriend, was a big plus.

Unlike the original Leslie Charteris story it is based on, Simon Templar and Penny Parker (a name change from the original story) do not live together. He meets her for the first time at the beginning of the film. After that, she comes and goes easily from Templar’s London townhouse.

Sally Gray did not make too many movies, but was a good actress with a fantastic voice, and who was memorable in the movie, “Green for Danger.” 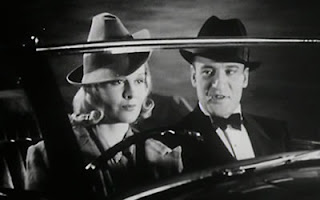 George Sanders was perfect casting as Simon Templar. He could pull off the debonair, witty, anti-hero better than almost anyone. Sanders is perhaps best known for his role as the theater critic in “All About Eve.” The only drawback to Sanders as the Saint was that he did not seem young enough or fit enough to match Leslie Charteris’ descriptions. But, for that, they would have needed Errol Flynn, which would have made it a whole different kind of picture.

The film follows a Leslie Charteris’ story, but if his plot about a gang attempting to distribute illegal Italian currency was thin, the filmmakers played it down even more, the way Alfred Hitchcock used a “McGuffin” – a plot device to thrust the characters into action, but something the audience does not care about. That works thanks to the brisk direction of John Paddy Carstairs. The film also has a nice, dark, noir look to it.