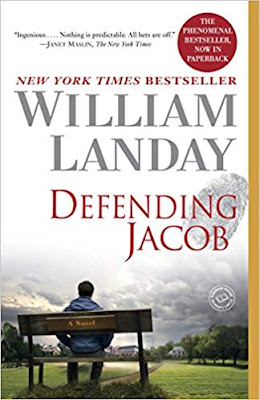 William Landay’s 2012 novel, Defending Jacob, was on the reading list of my wife’s book club. The tastes of the club almost never coincide with mine. But this one was different.

Defending Jacob is the story of a suburban family torn apart when the 14-year-old son is accused of murdering a classmate.

First-person narrator, Andy Barber, is the dad and central character in the story. He is the prosecutor overseeing the investigation into the stabbing death of a local eighth-grade boy, Ben Rifkin.

Andy knows the dead boy and the Rifkin family. His son Jacob is the same age as Ben and they went to the same school.

Clues and even motivations start coming in and they point to Jacob. In one of the many twists of this book, Ben was a bully and his frequent target was Jacob.

Andy refuses to see any connection. His words are 100 percent in Jacob’s corner. His thoughts betray his suspicions.

Defending Jacob is a novel that snuck up on me. I was caught up in the father’s anguish. Could Jacob have actually killed the other boy?

There is a bit of weird science woven into the tale concerning bad genes which can be passed down. But overall, this is a solid suspense story.
Posted by Elgin Bleecker at 12:48 PM
Labels: Defending Jacob, William Landay