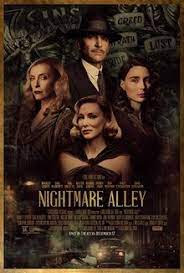 Director Guillermo del Toro’s new film version of “Nightmare Alley” is about to open in theaters.

And here’s hoping it sticks closer to the unsettling weirdness of William Lindsay Gresham’s 1946 novel of the same name, but without going too far off the deep end, as Guillermo del Toro is apt to do.

A few years ago, I wrote a piece about the novel. You can read it here.