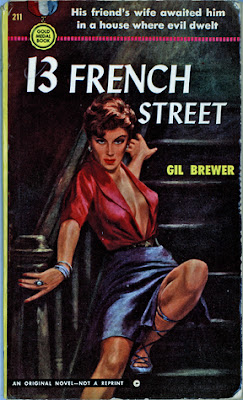 Gil Brewer’s 13 French Street is a sexy noir novel from 1951 written for a male market and first published as a paperback original, the kind of book once found on revolving wire racks in corner drug stores and bus stations. It has since been reprinted and continues to find new and appreciative fans.

Verne has done well in the post-war construction business and lives in a large house on the outskirts of a middle-American town. When Alex arrives, he quickly discovers two disturbing things at 13 French Street. The first is Verne’s beautiful, young, sexually charged wife, Petra, seems way too interested in him as he steps into the house. The second is Verne, himself. Once a big, strong, vibrant guy, Verne is now a haggard and worried man looking old beyond his years. Alex wonders if his friend is worn out from the job or from Petra? He has his suspicions, and with Petra coming on strong, he toys with the idea of doing a little aging himself.

When Verne announces that he must go out of town on urgent business, he insists Alex stay and keep Petra company. And that is where the average guy with his wits about him would put on his hat, grab his valise, and say, Wait up, Verne, you can give me a lift back to the station. But not Alex. Average guys in noir stories always fall into this trap. Didn’t Alex read Double Indemnity or The Postman Always Rings Twice?

After a fast start, Brewer’s story bogs down a bit, becoming a repetitive tease, throwing Alex and Petra together in scene after improbable scene. This goes on too long with a conflicted Alex wanting Petra and not wanting to betray his friend. But when Verne’s suspicious old mother, who also lives at the house, catches Alex and Petra in a compromising position, the story lifts off. There is blackmail and murder and more guilt until Alex feels like everything is going against him, even the weather. “The sky was a gray pall, splotched with black, as if it had some kind of disease that was spreading.” The disease is in his soul, and Alex knows it. He can see there is no escape for him. “It seemed as if every way I turned I ran into a hot iron wall.”

Brewer had his biggest success with 13 French Street, which sold more than a million copies, said Bill Pronzini in an essay on Brewer. The success kept Brewer mining gold from the same male oriented market for the next decade. The money may have kept him from fulfilling his dream of someday writing a serious novel. Then again, it might not have. Pronzini said he struggled with alcohol problems that lead to his death.

At his peak, Brewer was a writing machine, able to knock out a 50,000-word novel in less than two weeks, sometimes in as little as five or six days, Pronzini said. From the early 1950s to the mid-1970s, Brewer wrote 50 novels and 400 short stories, according to an article on him in the Los Angeles Review of Books.

While 13 French Street is a genre novel, Brewer’s talent is evident. His rapid writing is surprisingly readable and his spare style propels the reader though the story at high speed.