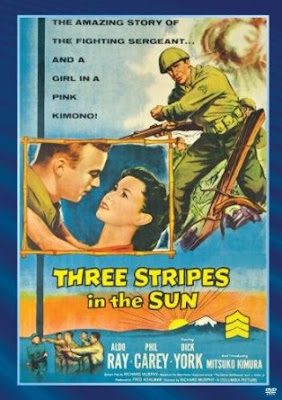 A 1955 film I had never heard of had this astonishing description on the cable guide:

Well, I won’t keep you in suspense, the film was not as promoted. The erroneous blurb only got some of it right.

“Three Stripes in the Sun” is a good, little, black and white movie, filmed on location in Japan, and based on a true story about Sergeant Hugh O’Reilly, played by Aldo Ray, assigned to occupation duty in Osaka after World War 2. Three years of combat have left O’Reilly with a deep hatred for the Japanese. But his prejudice erodes when he sees the wretched conditions of an orphanage and decides to help the children. He persuades his fellow soldiers to donate money and sneak food off the base and out to the orphanage. He even raises enough to build a new home for the kids. Yuko, a young Japanese interpreter for the army, played by Mitsuko Kimura, also assists Ray in helping the kids. O’Reilly and Yuko fall in love and have to fight the forces to stay together.

The film is similar to the Marlon Brando picture, “Sayonara,” which was based on a James Michener story, but came out two years later in 1957. The story of “Three Stripes in the Sun” originally ran in the New Yorker magazine.

Ray, Kimura and Phil Carey, as the commanding officer, are very good in the movie, but Dick York tries too hard to be funny and was better suited to later playing Samantha’s husband on “Bewitched.” A young Chuck Connors is also featured in the film as one of the GIs.

Writer Richard Murphy, a veteran of the war in the Pacific, directed the picture, and while he made only two films in his career, he did a good job of telling the story and using the Japanese locations. He had help from long-time Hollywood cameraman Burnett Guffey.

(For more overlooked movies, TV and videos, head over to Todd Mason’s site.)