Movies: Southpaw & the Problem with Hollywood 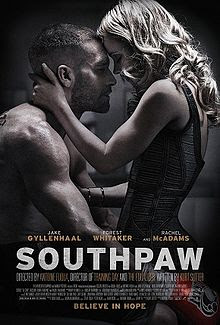 Watching a boxing film is, in a way, like watching boxing itself. There is only so much that can be done in a roughly 20-foot by 20-foot square area bounded by ropes, but it is the characters in the ring and the surprising things they do, or don’t do, that keeps everyone watching.

“Southpaw,” a boxing picture which came and went during the summer of 2015, is a pretty good sports movie and a very good melodrama.

Jake Gyllenhaal plays Billy Hope, an angry mug with no style or grace who somehow made it to the top. His wife, played by the beautiful Rachel McAdams, is the brains of the family and manages Billy’s career. One night, Billy lets his uncontrollable anger get the best of him and he loses his career, his money, and his family, including his little daughter.

Billy hits bottom and then works like hell to pull himself back up. He does this with the help of a gruff coach, played by Forest Whitaker, who owns a gym in a rough neighborhood.

As he did in “End of Watch,” Gyllenhaal pumped up and trained to a convincing physical level. The boxing sequences are well staged by director Antione Fuqua, but the heart of the story is outside the ring and Billy’s struggle is compelling.

The story is similar to every boxing film made in the last 80 years, but it is the participants – Gyllenhaal, McAdams, Whitaker, along with 50 Cent in a very good turn as a two-faced fight promoter and Oona Laurence as Gyllenhaal’s daughter – that keep everyone watching.

After viewing “Southpaw” on video, I was also thinking about this year’s Oscars. “Southpaw” is a well-made film directed by Antoine Fuqua, who is one of the few black film directors working in Hollywood. He, like all minority talent in 2015, was ignored by the academy voters who nominate films and film people for awards. True, the critics were not kind to “Southpaw,” but is “Mad Max: Fury Road” really a better movie?

The rapper, 50 Cent, who has appeared in quite a few films and was very good here, could have been recognized with a nomination in a supporting category, but was also ignored.

Consider the other talents who did outstanding work last year:

Michael B. Jordan, the young star of “Creed” – ignored;

Will Smith in “Concussion” ” – ignored.

This was just off the top of my head. There are plenty of others who were not recognized.

The people protesting the Oscars this year for the lack of diversity in the nominees may have a valid point. They might just be right when they say Hollywood has a problem.