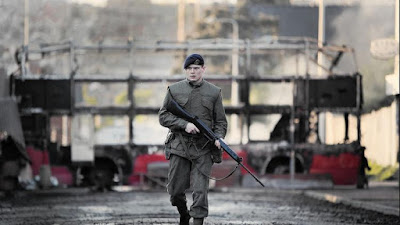 It is a thriller about a young British soldier, Gary, played by Jack O’Connell, sent to Belfast, Northern Ireland in 1971, a time when violence there was at a peak. While out on patrol, Gary gets separated from his unit during a clash between residents, soldiers and police, and finds himself alone and without his weapon, in a hostile city. Militants, who killed a fellow soldier, know Gary is somewhere in the neighborhood and are hunting him down.

Director Yann Demange does an excellent job of recreating the era and blurring the political lines. He thrusts Gary into a situation the soldier does not completely understand and into the mean streets where Gary, and the audience, cannot figure out who is friend and who is foe. This all makes for a tension-filled 99 minutes.

Demange further complicates the situation, going way beyond the usual simplified, Catholics vs. Protestants explanation that the news often used. Each side had groups, some sympathetic, some brutally violent.

The director also found people for his cast who seem not to be actors and who speak in the accents of the area. Some of the accents are quite heavy, but the intention is clear, and the voices lend an authenticity to this movie that at times has the look and feel of a documentary.

This is a very well done picture that at times plays like a fast-paced chase film and at other times slows down and moves like a scary slasher film.

“’71” and other films worth checking out are on a list posted at Noir Worth Watching.