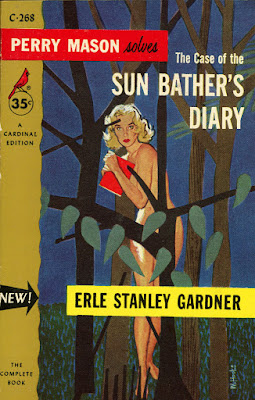 My forgotten book this week is not only not forgotten, but also frequently reviewed. Just yesterday, Steve at Mystery File posted a review of it. I suppose that is not unusual when considering Erle Stanley Gardner. The man wrote more than 80 Perry Mason stories and, 46 years after his death, he is still a favorite among readers of mysteries.

I read The Case of the Sun Bather’s Diary a couple of weeks ago while under the weather and wanting something light and fun to read. This book was just what the doctor ordered. Like all Gardner novels, part of the pleasure was trying to figure out the mystery before Mason reveals it. Another part was spending time with old friends: Mason, the savvy attorney; Della Street, his hard working legal secretary; and Paul Drake, the highly competent private detective.

In The Sun Bather’s Diary, Mason gets involved with an old case of an armored car robbery when the daughter of the man accused and convicted of the crime calls the lawyer’s office and says everything she owns, her trailer home, all her possessions and even all her clothes have been stolen and she is outdoors, naked, making a call from a public phone.

From that humorous and intriguing opener, Gardner sets a complicated tale in motion.

Mason winds up with three big problems in this book. First, he must provide a defense for the nude caller when she is accused of murder. Second, he has to figure out how the seemingly impossible armored car robbery was pulled off and prove the girl’s father did not do it. And third, he has to avoid jail himself when someone tries to frame him. There is a great moment when district attorney Hamilton Burger hauls Mason before a grand jury and grills him.

I am a fan of Gardner, his writing style, his understanding of the law, and his amazing ability to spin so many yarns that kept Mason busy for four decades. I can recommend The Sun Bather’s Diary as another enjoyable puzzle solved by Perry Mason.

(For more forgotten books, please check out Patti Abbott’s blog. And thanks to Todd Mason for compiling the list this week.)