FFB: Honey in His Mouth by Lester Dent 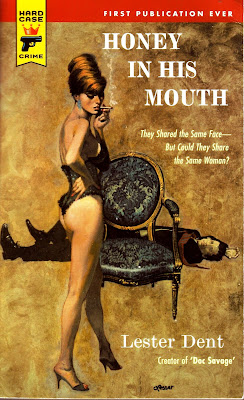 Prolific author Lester Dent is a writer I have not read nearly enough of, but working to correct that I picked up Honey in His Mouth, his fast paced, unpredictable, crime novel.

Giving away too much of the plot would steal from readers the pleasure of discovering this story for themselves. So, all I will say is this:

A shifty guy named Walter Harsh, who scratches out a barely legal living as a photographer, is approached by a shady man who has a money-making scheme. Harsh is a dead ringer for an important person.

Dent keeps the story moving, filling it with one unexpected turn after another. Walter Harsh hangs in there, twist after twist, focusing on the big money at stake, even though his life is at stake too. Greed keeps winning out. This is a noir novel with fear, criminality and sex on every page.

Lester Dent (1904-1959) who came up through the pulps and created Doc Savage, knew how to keep his main character and his reader hooked and squirming.

Publishers Weekly said Dent wrote the book in 1956, but it was not published until 2009 when Hard Case Crime issued it.
Posted by Elgin Bleecker at 7:47 AM
Labels: Doc Savage, Hard Case Crime, Honey in His Mouth, Lester Dent