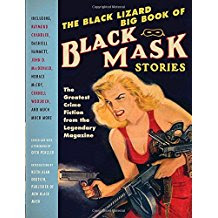 This week I dove into my late-winter impulse buy, The Black Lizard Big Book of Black Mask Stories, edited by Otto Penzler. It is 1112-page paperback with 53 stories from that pulp.

In “Fall Guy,” by George Harmon Coxe, Boston newspaper photographer Flashgun Casey responds to a call for help from a woman being blackmailed. It is not long before Casey gets himself beaten up, knocked out, suspected of murder, and made the fall guy when $10,000 of the woman’s cash is stolen.

Coxe’s style is light and straight forward. There is not a lot of depth or character development here, and no newspaper work, other than two brief references. I would have liked more newsroom chaos, headlines and great photos caught on the fly. But the story was fast paced with plenty of action.

Publications like Black Mask certainly had an impact on the movies in the early sound era. But, reading “Fall Guy,” I wondered if by June 1936, when “Fall Guy” was published, the movies were having their own effect on the pulps. Coxe’s writing had the feeling of a jaunty B-picture from that time.

George Harmon Coxe, (1901 – 1984), wrote yarns featuring Casey through the 1930s and into the 1940s. The character also starred in a radio program. Coxe wrote another series with another newspaper photographer called Kent Murdock.

“Doors in the Dark,” by Frederick Nebel, was published in the February 1933, issue. In it, police Captain Steve MacBride and newspaper reporter, Kennedy (no first name given), solve the murder of a friend of MacBride’s. The man, found dead in a waterfront warehouse, appeared to have committed suicide. But MacBride rejects that idea and digs into what really happened.

Descriptions in the story are a bit clunky, but Nebel’s dialogue is snappy and his story has momentum. Nothing stops MacBride once he takes on a case. And Kennedy is a surprise. He is always drinking but never too drunk to help solve the murder.

Nebel uses some archaic words which give the story a feeling of the times. He calls MacBride’s police car a “phaeton,” an old word for a touring carriage. A woman “flounced” across a room. And twice someone “scaled” an object, as in, “Cohen scaled a slip of paper onto the desk.”

Scale is a word I associate with climbing mountains, weighing objects, or cleaning fish, but I’ve never heard anyone use it as Nebel does. Merriam-Webster’s dictionary provides several definitions, including this one: “to throw (something, such as a thin, flat stone) so that the edge cuts the air or so that it skips on water: skim.”

Frederick Nebel (1903 – 1967), is a writer I know from a book of his collected short stories featuring a detective named Cardigan. His MacBride-Kennedy characters were featured in a series of B-movies in the 1930s with some changes. Newspaper man Kennedy became newspaper woman Torchy Blane.
Posted by Elgin Bleecker at 12:58 AM
Labels: Flashgun Casey, Frederick Nebel, George Harmon Coxe, MacBride-Kennedy, Otto Penzler, The Black Lizard Big Book of Black Mask Stories, Torchy Blane.