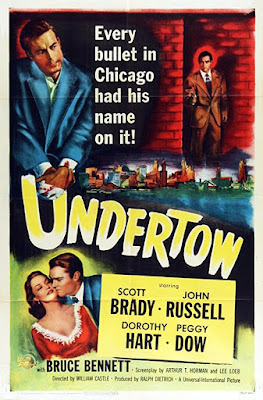 The 1949 movie, “Undertow,” is a nicely produced if not too surprising crime story of a returning army vet, Reagan, who travels across the country to marry his long-time sweetheart, the niece of a Chicago racketeer.

Reagan, once a delinquent associated with a gang, is warned off by both the girl’s uncle and the Chicago police who pick him up the moment he sets foot in their city. When he disregards the advice and goes to see his girlfriend, he is slugged and framed for the murder of the uncle.

Wanted by cops, Reagan has nowhere to hide except at the apartment of a young school teacher he met on his cross-country trip.

With all avenues blocked and no leads on who actually killed the uncle, Reagan feels backed into a deadly corner, just like most protagonists in film noir. This is a smoothly told, 71-minute crime picture with compelling stars and a lot of interesting location photography in Chicago and in Reno, Nevada.

“Undertow” stars Scott Brady (brother of Lawrence Tierney) as Reagan, Peggy Dow (an up and coming star of the era who quit Hollywood a few years later) as the teacher, and John Russell (who went on to play a tough sheriff on TV’s “Lawman”). If you look quick, you will spot Rock Hudson (listed as “Roc”) as a detective in one of his earliest roles.

The movie was directed by William Castle, who made crime films and westerns in the 1940s and 1950s, and went on to produce and direct a series of horror movies with promotional gimmicks like “The Tingler,” where theater seats were wired to give viewers a mild zap.