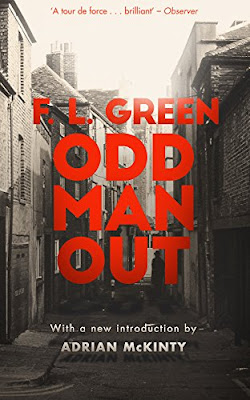 This week’s read for Friday's Forgotten Books, is an old, possibly forgotten, crime story set in Ireland. It is F.L. Green’s 1945 novel, Odd Man Out.

During World War II, four Belfast men hold up a large linen mill and make off with the payroll. Johnny, head of a political opposition group called The Revolutionary Organization, planned the heist to raise money for the cause. But the plans go wrong, mostly due to him. Feeling ill, he hesitates and is caught outside the front doors by a pursuing mill executive with a gun. Johnny kills the office worker and is himself shot and wounded. He stumbles to the getaway car, but the nervous driver speeds off before he can climb in and he is thrown into the street. Now alone, Johnny has to find a safe place to hide and make his way back to his own neighborhood.

Here the book leaves Johnny and follows the other three robbers as they return to a safe house. Distraught by the killing, the wounding of Johnny and the loss of him during the getaway, they report to the stern second in command of the Organization. Green does a good job depicting the nerves before and during the holdup, and the anxiety and fear after it.

Odd Man Out is divided into two sections. The first continues following the three men who attempt to hide in their neighborhood while police comb the area. Four other men from the group go in search of Johnny. None of this goes well. The police quickly block roads and send out numerous patrols. One man trying to avoid the cops by getting on a crowded city tram is a highlight.

A woman named Agnes, who is in love with Johnny and will do anything to help him, risks her own life by going in search of him. There is a wonderful scene in which Agnes goes to an elderly priest. The priest already has a visitor, a cunning creep holding a birdcage and telling a story of his injured bird. The story of course refers to Johnny and this man’s attempt to sell information.

The second part of the book picks up Johnny’s story and follows him, covering the same time period as the first section and extending to the end.

Odd Man Out is full of excellent scenes. A pair of middle aged sisters find the wounded Johnny and tend to him only to have their husbands come home and insist they put him out in the street. If the police catch them helping him, they will all be sent to prison. But if they turn him in to the cops, the Organization will hunt them down. It is a great dilemma.

Others run into the same problem. The owner of a large, rowdy pub sees Johnny slip in and hide in a secluded part of the bar. Should he throw him out? Should he let him stay? What if his patrons spot him?

There is a lot to like in Odd Man Out. But there is also a lot that put me off. Far too many passages in this book had me thinking of Rule No. 10 of Elmore Leonard’s advice on good writing: “Try to leave out the part that readers tend to skip.”

Still, Odd Man Out, is a good story and worth reading.

A fairly new edition is available on Amazon (the cover is shown here) with an introduction by Adrian McKinty, author of the excellent, Belfast-set Sean Duffy mysteries.

In 1947, Odd Man Out was produced as a movie starring James Mason as Johnny and directed by Carol Reed. I’ve only seen the picture once and that was many years ago. What I remember is an exciting first half and a dull second half, dominated by the scenery-chewing actor Robert Newton.

As for movies, anyone in the mood for a charming film to watch on St. Patrick’s Day should check out “The Rising of the Moon” showing tomorrow afternoon on TCM.