FFB: The Snatchers by Lionel White 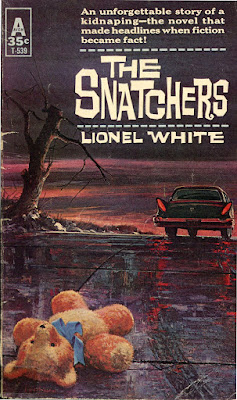 Lionel White’s crime novels of the 1950s, 60s, and 70s were the next generation of lean, tight stories told in the hardboiled style of Dashiell Hammett. He was a master at devising well-planned heists that sound great, but when executed go wrong.

The Snatchers is one of those stories, only this time the caper is the kidnapping of a little girl, the child of a wealthy Connecticut family.

Cal Dent, a hard, 33-year-old ex con, works out every detail of the kidnapping. His problems come when the team he assembles, Red, a dim ex-boxer, Pearl, a boozy tough cookie, Gino, a violent gangster, and Fats, a conniving trigger man, do not follow Dent’s plans to the letter. Their petty jealousies, hates and lusts lead them astray and put the plan in jeopardy.

Much of the book takes place in a beach cottage where the gang hides out while waiting for ransom money to be delivered. The close living gets on everyone’s nerves. To make matters worse, a small town cop seeing people come and go from the cottage begins to snoop around, heightening the tension. White keeps the whole thing moving at a terrific clip with twits and dangers in every chapter.

Lionel White was a newspaper reporter in the 1920s and 30s, became and editor and went on to edit detective magazines in the 1940s and 50s. He published his first novel in 1952, when he was pushing 50 years old. He went on to write 38 novels. His most well known book is probably Clean Break, later re-titled The Killing. The Snatchers, from 1953, is his second novel.

In his book about director Stanley Kubrick, The Wolf at the Door, Geoffrey Cocks said Kubrick, in the mid-1950s, tried to make a film of The Snatchers, but the Hollywood production code rejected the script he prepared with Jim Thompson. In 1956, Kubrick released one of his best films, “The Killing,” based on Clean Break, from a script written by Thompson. The Snatchers was later filmed in 1968 as “The Night of the Following Day,” starring Marlon Brando.

Now, a few notes on my copy of The Snatchers. Last month, in a little shop of used books I get to a couple times a year, there was a thin, tattered edition of this book squeezed onto a shelf of far newer books. The spine was broken, the pages, and even whole sections were falling out. The lady at the counter looked it over and said she could only charge me 25 cents for an old book in such bad shape.

The cover of this copy is the one pictured and was probably done in the late 1950s, judging by the fins and tail lights on that car. Reading the text, I came to believe the book was edited for British readers. The clues were spellings like programme when describing a radio broadcast, and colour for color, and a word like windscreen during a tense scene involving a windshield wiper that would not function in a rainstorm.

And for the critics who jump on errors in new novels and digital texts, I will just point that this decades-old Avon edition of The Snatchers had several goofs. One of them was a doozy. The name of a character not in a scene was assigned to a line of dialogue.

But The Snatchers is such a tight, well paced novel that a few glitches in its roughly 60,000 words can be forgiven.

This book is a must read for fans of hard boiled crime stories.