Film: In the Heat of the Night 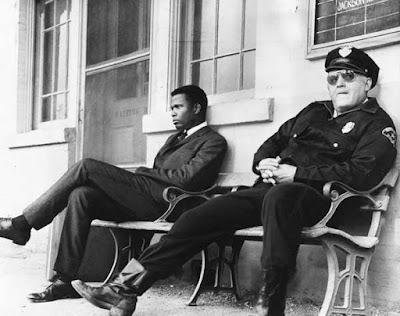 Recently, I wrote a piece about John Ball’s 1965 novel, In the Heat of the Night. Several days later, a cable channel ran the 1967 movie based on the book.

The movie I had seen before, but watching it again so close to having finished the novel made for an interesting comparison.

The book and screen stories are about a black man, mistakenly arrested for murder in a town in the American south, who turns out to be a cop. Virgil Tibbs, the black detective, is asked to help the local police chief, Bill Gillespie, in the murder investigation. Tibbs stays, and his presence causes sparks to fly in a town unused to dealing with an African-American as an equal, let alone an authority.

Screenwriter Stirling Silliphant and director Norman Jewison wisely kept the structure of the mystery and even more wisely kept some of the best lines from the book, particularly, “I’m a police officer,” and “They call me Mr. Tibbs.” But the filmmakers veered away from the book in adapting it for the screen. Again, wisely, they created more drama and more dramatic scenes between Tibbs and Gillespie, played by Sidney Poitier and Rod Steiger. They also took away the only ally Tibbs had in the novel, a rich and powerful man named Endicott. In the movie, Endicott is the county’s wealthiest resident and his cotton empire is the major employer. Reimagining him as a bigoted Big Daddy brings about a conflict with Tibbs that so shocks Endicott that he has to confirm the incident by asking Gillespie, “Did you see that?” To which Gillespie responds, “I saw it…” and actor Steiger leaves off the usual completion of the phrase, “…but I don’t believe it.”

At that point in the story, Tibbs won a grudging respect from Gillespie, who is losing his balance and is now putting the law and good police work ahead of the traditional racial biases.

Steiger did a great job of playing the middle-aged southern cop who changes during the course of the story. As in the book, Gillespie is a newly appointed police chief and over his head when it comes to major crimes. As played by Steiger, he seems to have been a former motorcycle cop (his tinted glasses and his trousers tucked into his boots give that impression) who thinks he can control the town the way he controlled speeding motorists.

The movie’s Virgil Tibbs is more aggressive than the book’s when it comes to showdowns with Gillespie. Their scenes together make this movie soar.

The filmmakers made a few other changes for the film. They set the town in Mississippi, where the book mentioned it being somewhere in the Carolinas. They added a chase scene when a suspect is tracked down. They also amped up a fight scene and the climax of the movie. Some of the characters were changed, including the murdered man. They also dropped several characters or reduced them to supporting roles, like Officer Sam Wood, who plays a central part in the book.

“In the Heat of the Night” hit theaters at a time when civil rights were on the news every evening. Americans saw southern cops turning fire hoses on protestors and threatening them with police dogs. Activists Andrew Goodman, James Chaney, and Michael Schwerner were murdered in Mississippi in 1964. The movie, “Mississippi Burning,” was based on that case. President Lyndon Johnson signed the Civil Rights Act in 1964. One year after “In the Heat of the Night” came out, Martin Luther King, Jr. was assassinated in Memphis in 1968. It was a violent and dangerous time in America.

As a kid growing up in the North, I remember teenagers talking worriedly about plans to go on spring break in Florida. To get there, they would have to drive through several southern states where they feared cops like Chief Gillespie would not look kindly on “hippie long hairs.” Even if their hair was not that long, they were still Yankees.

Strangely, just three years after the release of the movie, Dodge, the car company, came out with a television commercial in which a southern cop pulls over a young (white) fellow driving a new, 1970 Challenger. The spot made fun of the cop who in a few short years had become a cliché and a joke. Several years after that, Jackie Gleason played a comic version of a small-town southern police chief chasing Burt Reynolds in 1977’s “Smokey and the Bandit.”