Film: “The Big Combo” the End of Film Noir 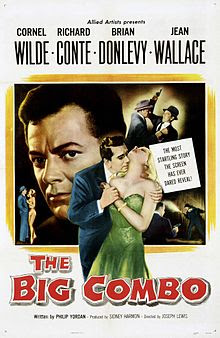 The crime picture, “The Big Combo,” is so chock-full of noir elements it is almost a parody of that film style.

Hitting theaters when it did, in 1955, makes it one of the last movies of the film noir era. That era – the dates are constantly argued – goes from the end of WW2 to about 1955, when the form ran out of gas and tastes changed. Some say film noir started in 1944 with Billy Wilder’s “Double Indemnity” and ended with Orson Welles’ “Touch of Evil” in 1958. Others claim earlier and later start and end dates. Whatever the time frame, “The Big Combo” shows the genre coming apart at the seams.

Shot in shadowy black and white by ace cinematographer John Alton, “The Big Combo” is the story of Lt. Diamond, a police detective, played by Cornell Wilde, with twin obsessions – he wants to rid his city of a racketeer named Brown and he desperately wants Brown’s girlfriend, Susan, played by Jean Wallace.

Brown, played by Richard Conte, also has twin obsessions – he wants to be the biggest wheel in the city and he must have sex with Susan, the former society girl now living with Brown. He nearly loses control whenever he is around her, and his touch sends her into a sexual fog. In one scene, Brown practically breaks her neck in the roughest screen kiss ever. In interviews, director Joseph H. Lewis said he pushed the Hollywood production code further than anyone ever had with those scenes. But they are so overwrought that they border on the comical.

In supporting roles as Brown’s hired guns, Lee Van Cleef and Earl Holliman play heartless killers who also share a bedroom. Veteran tough-guy, Brian Donlevy, is a resentful second in command of Brown’s empire, and through no fault of his, Donlevy’s final scene is so bad that he must have needed the paycheck. Helene Stanton has a nice turn as a leggy chorus girl obsessed with Diamond.

Diamond, the tormented cop, has a smiling, untrustworthy superior, played by Robert Middleton, who is constantly trying to cool down the detective, to the point of killing Diamond’s investigation into a disappearance that Diamond believes was a murder committed by Brown.

Lust, corruption, crime, and violence all play into “The Big Combo,” and are barely contained by director Lewis, who also made “Gun Crazy” and was no stranger to modestly budgeted crime films. He usually handled atmosphere and action well, but in “The Big Combo” he stages a torture scene that is so ludicrous that it damages the remainder of the movie. The dramatic scenes are presented in long, uninterrupted takes with his actors speeding through their lines.

Rushing through Philip Yordan’s script was a mistake. He should have trusted Yordan, a reliable Hollywood vet. (Yordan was also a hero for serving as a “front” for blacklisted friends the 1950s, putting his name on their scripts and selling them to the studios, then turning the money over to the writers so they could make a living.)

Yordan’s stylized lines usually sound great in films like this, and many of them come through fine in “The Big Combo.” For instance, when Diamond tries to convince Susan to leave Brown, she tells him:

“I live in a maze, Mr. Diamond, a strange, blind, and backward maze. And all the little, twisting paths lead back to Mr. Brown.”

Now is that noir dialog, or what?