Alfred Hitchcock’s “Incident at a Corner” 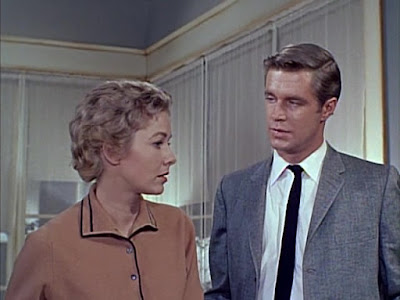 Two months before Alfred Hitchcock’s “Psycho” premiered in June, 1960, his one-hour television movie, “Incident at a Corner,” aired on April 5, 1960.

What movie, you may be asking?

“Incident at a Corner” was part of a series called “Startime,” that ran from fall 1959 through spring the following year.

It is the story of James, an older man working as a crossing guard for a local school, who becomes the target of an anonymous note sent to the school. The malicious letter warns teachers and parents to keep their children away from him. The rumor gets around town fast and James is fired. Outraged by the public’s reaction to gossip without ever hearing from James or questioning the kids to find out the truth, his niece and her fiancé set out to set the record straight and restore James’ reputation.

This Hitchcock-directed episode has the feel of some of his later films where quiet scenes build the tension. He used this technique in "The Wrong Man" and "Vertigo," as well as in "Psycho." While the most memorable moment of "Psycho" is the shower sequence with its fast cutting and shrieking music, much of that film is eerily quiet.

"Incident at a Corner" was based on a short story by Charlotte Armstrong (1905-1969), a prolific author.

Character actor Paul Hartman played James. The two fighting against the accusation were played by Vera Miles and George Peppard. Also in the cast were Philip Ober, who played the brief but memorable part of the man who gets a knife in the back at the United Nations in Hitchcock’s “North by Northwest,” and Jerry Paris, who went on to become the funny dentist neighbor on “The Dick Van Dyke Show.”

Behind the camera, Hitchcock regulars Joan Harrison and Norman Lloyd produced the color episode, and John L. Russell, who shot “Psycho” and 96 episodes of “Alfred Hitchcock Presents” and “The Alfred Hitchcock Hour,” was the director of photography.

“Incident at a Corner” is currently on YouTube (here). I say currently because films are often taken down due to copyright issues. This one is worth seeing.
Posted by Elgin Bleecker at 1:36 PM
Labels: Alfred Hitchcock, Charlotte Armstrong, George Peppard, Incident at a Corner, Vera Miles