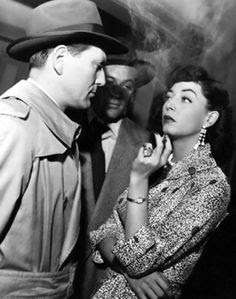 A little, black and white movie from 1952 with no big stars may be one of the best films in several categories.

“The Narrow Margin” is a terrific suspense picture, it is a good crime movie, and it is a classic of film noir.

While it was made on a small budget it is as good as any big-budget A-picture, and it may be the best B-movie ever produced.

Detective Walter Brown is assigned the thankless task of escorting and protecting a prosecution witness on a train from Chicago to Los Angeles. Brown, played by tough-guy-actor Charles McGraw, the man with the sandpaper voice, does not like the job and does not like the witness, a Mrs. Neil, played by B-movie bad-girl Marie Windsor. Mrs. Neil is the wife of a slain gangster. Brown hates gangsters and their relatives.

Minutes into the movie, Brown and his partner are ambushed by hit-men aiming to knock off Mrs. Neil. Brown’s partner is killed and Brown’s nerves start buzzing like high-tension wires.

Most of the film takes place on the train where the claustrophobic quarters, tight corridors and no-place-to hide situations tear at Brown, as he spots one, then another, and finally a third gunman on the train.

Charles McGraw does an excellent job of projecting a sense of duty-bound courage and almost overwhelming fear. The assignment is eating him alive. 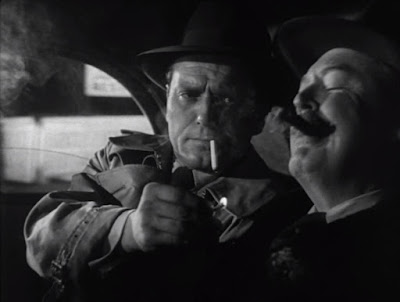 His job is made no easier by Mrs. Neil, who is nearly impossible to protect. She is a wisecracking pain in the neck who does not seem to realize the mortal danger she is in. At one point, when Brown is trying to keep her hidden in her compartment, she starts blasting her record player.

“The Narrow Margin” is full of crazy twists and moments of suspense.

The film was directed by Richard Fleischer, and is one of his earliest productions. Fleischer makes the most of his opportunity, coaching strong performances out of his cast and employing a camera style that projects the sweaty unease of Brown right off the screen and into the audience. His direction is the work of a young, energetic director proving he is worthy of handling bigger budget films. In a sequence at a station stop, one of the few times Brown gets outside, Fleischer’s innovative camerawork keeps Brown uncomfortably close to the audience while framing and reframing a host of suspicious characters lurking about, all keeping an eye on Brown. 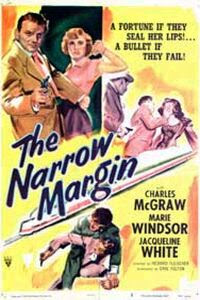 For a fight scene in a compartment, Fleischer uses a hand-held camera before that technique was readily accepted. It gives the fight a brutal feeling. Watching it, I wondered if British director Terrence Young recalled “The Narrow Margin” when staging the fight scene between Sean Connery and Robert Shaw in a train compartment in “From Russia With Love."

In "The Narrow Margin," Charles  McGraw (1914-1980) gets one of his few chances to play the lead. For about four decades, McGraw played supporting parts, usually as gruff military men or gruff cops. He is also remembered as one of the hit-men sent to kill Burt Lancaster in 1946's "The Killers."

Marie Windsor (1919-2000) had a long career in movies and television, often playing tough women in crime films like Stanley Kubrick’s “The Killing.”

Richard Fleischer (1916-2016) was the son of cartoon producer Max Fleischer, and nephew of Dave Fleischer. He had a long and varied career making all sorts of films from the late 1940s through the late 1980s, including “The Boston Strangler” with Tony Curtis and the big-budget, action-picture “The Vikings” with Curtis and Kirk Douglas.

The film was produced by Stanley Ruben (1917-2014) who started his career in the Paramount mail room in the 1930s and went on to produce movies and television programs into the 1990s.

“The Narrow Margin” is a lot of movie packed into a small, 71-minute package.