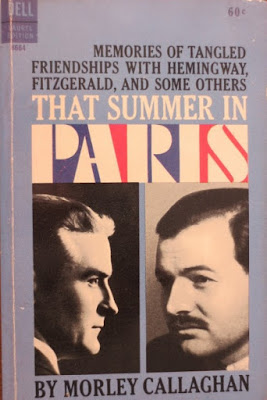 That Summer in Paris is a 1963 memoir by Canadian novelist, short-story writer, and journalist Morley Callaghan about the beginning of his career and the famous people he hung out with in 1929.

Starting with his first writing job as a reporter on the Toronto Star while still in college, he tells of a colleague who briefly joined the newspaper. This reporter was just getting noticed for his short stories and was something of a curiosity in the newsroom. It was Ernest Hemingway.

Callaghan had read Hemingway’s stories. The two became friends and Hemingway asked to see some of Callaghan’s fiction. Hemingway encouraged Callaghan and asked him to send more of his short stories to him when Hemingway returned to Paris, which Callaghan did. Hemingway thought Callaghan had talent and showed his work to his friend, F. Scott Fitzgerald. Fitzgerald wrote to his New York editor, Maxwell Perkins of Scribner’s, and soon Callaghan found himself with a new group of friends.

Moving to Paris with his wife in 1929, Callaghan, then 26, picked up his friendship with Hemingway. The two men would workout weekly by going to the American Club, putting on the gloves and boxing. Heavy set and over six-feet tall, Hemingway seemed no match for the five-foot-eight Callaghan. But Callaghan had written a boxing story and Hemingway wanted to see if the younger, smaller man knew anything about the sport. Callaghan not only knew his stuff, but was a better boxer than Hemingway and often bloodied the big man’s lip. Hemingway professed to enjoy their private bouts, but Callaghan’s skill irked him.

Callaghan understood Hemingway’s need to be the champion in everything: boxing, drinking, writing. His competitive spirit extended to all writers, even to Fitzgerald. When he knocked Hemingway down during a workout at which Fitzgerald was present, one of the best scenes in the book, Hemingway turned on Fitzgerald, and Callaghan recalled it as the beginning of a rift between the two men.

While Callaghan’s memoir is mostly focused on Hemingway and Fitzgerald, there are many anecdotes about, and observations of, famous people of the 1920s, including Perkins, Zelda Fitzgerald, Sinclair Lewis, Sherwood Anderson, Ford Madox Ford, Sylvia Beach, and James Joyce. In one of the funnier stories in the book, Callaghan recalls meeting the Irish writer who had a reputation for being shy and reserved and reluctant to meet new people. But he found Joyce warm and welcoming and with a wicked sense of humor.

That Summer in Paris was written shortly after a friend of Callaghan’s told him in 1960 of meeting Hemingway and how Hemingway recalled the times he and Callaghan boxed. This stirred Callaghan’s memories of Paris and how rivalries and squabbles had distanced many of those writers from each other. Callaghan had been out of touch with Hemingway for many years. In 1961, he learned of Hemingway’s death and decided to write the memoir.
Posted by Elgin Bleecker at 12:19 AM
Labels: Ernest Hemingway, F. Scott Fitzgerald, Ford Madox Ford, James Joyce, Maxwell Perkins, Morley Callaghan, Sherwood Anderson, Sinclair Lewis, Sylvia Beach, That Summer in Paris, Zelda Fitzgerald