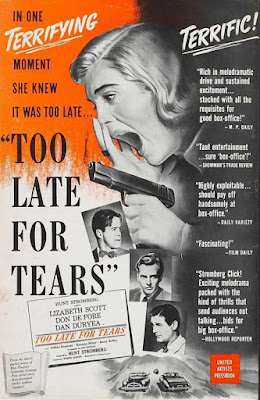 Actress Lizabeth Scott may not be the Queen of film noir, but from the many shadowy crime films she made in the 1940s and ‘50s, she could be dubbed the Duchess of Darkness.

One of the darkest movies she made was “Too Late for Tears” in 1949.

Scott plays an unhappy housewife whose ordinary husband, played by Arthur Kennedy, does not earn nearly enough to support her in the style to which her character feels entitled. Out for a drive one night, someone in a passing car tosses a satchel full of money into the backseat of their convertible. Scott urges Kennedy to keep it even after they are chased by someone, obviously a blackmailer, who was supposed to get the bag.

As a compromise to his wife, the husband hides the money. But just having the illegal loot is eating him alive. Scott on the other hand is thrilled and excited by their windfall, despite the very real danger of being tracked down by the blackmailer.

The blackmailer is played by Dan Duryea, a noir regular and a man who could portray sleazy corruption very well. Duryea shows up at Scott’s apartment to force her to give him the money, but he finds himself up against someone tougher and more ruthless.

To reveal any more of the plot would take away the pleasure of watching this crazy, twisty movie.

The cast is excellent in making this farfetched story into an enjoyable and suspenseful little film. Credit must also be given to director Byron Haskin, a former cameraman and special effects expert who went on to direct many films, including the 1953 version of “The War of the Worlds.”

“Too Late for Tears” was written by Roy Huggins, who later had a big career in television as creator of the James Garner series Maverick and many others. The film was produced by long-time MGM supervisor, Hunt Stromberg, who by the late 1940s was making movies as an independent producer.

Poor quality prints of “Too Late for Tears” are in circulation and even available on YouTube. But a beautifully restored version aired recently on Turner Classic Movies. The showing was hosted by author Eddie Muller, the founder and president of the Film Noir Foundation, the non-profit organization responsible for the restoration of this movie and others. 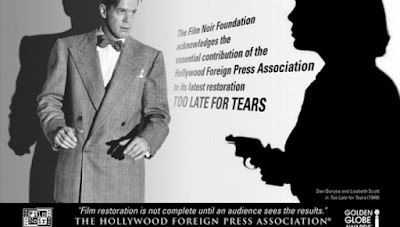