“La Bete Humaine” is a 1938 French film from Jean Renoir, based on an Emile Zola novel, about obsessive love, passion, murder and mental problems. 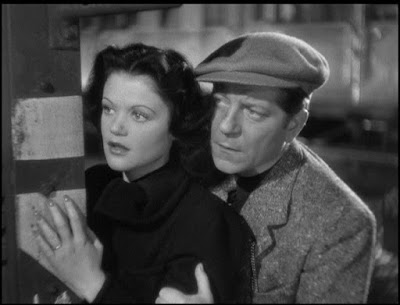 Jean Gabin plays a tough, stoic, train engineer whose desire makes him a danger to women. Simone Simon plays a cheating wife whose husband kills her lover and the only one who can nail them is the unwitting witness Gabin.

Gabin falls for Simone. Simone Simon, often described as kittenish, is today best known for her role in the 1942 movie, “Cat People.” Gabin promises Simone he will keep quiet, and from there the story twists and turns with passion, mistakes and guilt piling up in scene after scene.

French films like “La Bete Humaine” and a handful of others, known as Poetic Realism, were also the predecessors to American film noir along with the German Expressionism movies of the silent era. Gabin, a sort of James Cagney of France, who could also out cool Bogart, was a frequent star of Poetic Realism (“Quai des Brumes,” “Pepe le Moko”).

He and all the actors play their scenes in a low-key manner, but the emotions bubbling beneath the surface are feverish. The sex, while tame by today’s standards, must have been sizzling in the 1930s, especially for American audiences subjected to Hollywood’s Hayes code. But audiences here may have seen a censored version. A 1940 New York Times review noted the film’s running time as 90 minutes, while the complete film runs 99 minutes.

Renoir, the son of the French Impressionist painter, was a director known for his deft handling of social settings, so it is surprising to see how well he integrates the many fast-moving train sequences.

How much symbolism can be read into shots of large, powerful locomotives hurtling down the tracks with their blazing hot, coal-fired engines? Yet one of those shots was almost comical. Following a dispute between Gabin and Simone, Renoir cut to two engines in a rail yard heading for what looks like a sure collision.

“La Bete Humaine” is one of the great films of its era, and with its attractive stars and snappy pace, it holds up surprisingly well today.
Posted by Elgin Bleecker at 12:30 AM
Labels: Film noir, Jean Gabin, Jean Renior, La Bete Humaine, Poetic Realism, Simone Simon