An interview with author Dana King 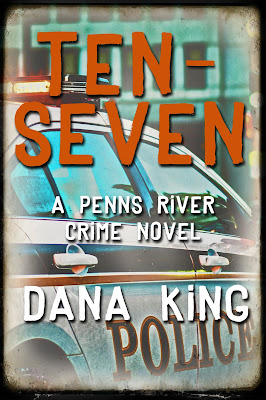 Dana King is the author of 10 books and several short stories. His novels A Small Sacrifice and The Man in the Window were nominated for Shamus Awards. He’s written five novels in his Nick Forte series, and his fourth novel in the Penns River series came out January 21.

ELGIN BLEECKER: Dana, welcome to The Dark Time. Your new novel, Ten-Seven, just came out. Would you tell us about Penns River, your fictional small city in Pennsylvania, and about its police department, and what its detectives face in your new story?

DANA KING: Pittsburgh’s recovery after the collapse of the steel industry is remarkable, but it never really made it north up the Allegheny River. Penns River still has an economy that runs about as well as it did in the 70s and no real hope of things getting materially better. The new low-roller casino was supposed to bring untold riches; instead it brought a new way to siphon money out of the town, along with increased crime. The persistent poverty whipsaws the police between having more crime and less money for the resources to fight it. In Ten-Seven, an apparently random act of violence has repercussions out of proportion to its initial effect because there’s too much going on for the beleaguered cops to concentrate on anything.

EB: I am curious to know how the series began – the conception that lead to the first novel, Worst Enemies. Was it the location? Was it Detective “Doc” Dougherty? Or did you start with the killer and his crime?

DK: Worst Enemies began as an idea to put a twist on Patricia Highsmith’s classic Strangers on a Train. I’d not read the book, nor had I seen the movie; I just knew the premise. All my previous stories were set in and around Chicago but I hadn’t lived there in a while and wanted a location I knew but where I could also make the stories about more than the featured crime. I grew up in the three small towns that make up Penns River and went back often to visit my parents, so I took a page from the “Write What You Know” school and placed the story there. Ben Dougherty (pronounced “DOCK-erty”) was my anchor, the one person who saw the town the most like I did, as he’s been away for quite a while (in his case, in the Army) and was able to place his love for the place in perspective. I chose the name deliberately to anchor myself there: my father’s first name was Benjamin and my mother’s maiden name is Dougherty.

EB: I have a clear mental picture of Penns River, its neighborhoods and people. But you never wrote any long descriptions. It was all subtle suggestions, brief impressions. When describing a person or place, how much is too much, how much is too little, and how do you know when you’ve got it just right?

DK: Everything is subordinate to the needs of the story, so all descriptions have to be proportionate to how important they are in relation to the story. If something matters for the story—say a character needs to have brilliant blue eyes—then I’ll describe them. That’s not to imply I never make digressions from the main thread. Not at all. But when I do digress to set a mood or to build a character in the reader’s mind, then whatever I choose to describe is critical to that story, even though it’s smaller. I rarely worry if the description is too little, as I only want to give enough for people to form some image for the movie that’s playing in their heads. I know it’s too much when I’m editing and start to feel antsy for things to move again. When in doubt, too little is almost always better than too much.

EB: Your Penns River cops sound like real people. I think I can even detect a regional accent. Do you recall specific people when composing dialogue for your characters? And once you hear it, how do you get it down on paper?

DK: It’s a writers’ joke, but I listen to the voices in my head. Most of my dialog comes from me putting myself in a situation and transcribing how I think that conversation would go, making adjustments for character differences along the way. The first draft is very close to a transcription of what goes on in my head, so much so that I sometimes have pages with no tags or attributions as my fingers try to keep up with what I’m hearing; delineating each character’s method of speaking takes place in edits. I still have a fairly pronounced Western Pennsylvania accent and I can call up voices from my past pretty easily. I think it also helps that I was a classically trained musician so I have an ear for tone and rhythm that is helpful here.

EB: Thanks, Dana, for taking the time to discuss your new book and your writing.

His web site is here.