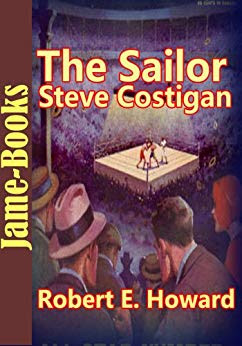 Fans of Robert E. Howard might wonder what took me so long, but it was not until last summer that I discovered his funny, fighting character, Steve Costigan.

Hopping around Amazon, I found a collection of 21 Costigan stories for 99 cents on Kindle. Now I am slowly working my way through the yarns.

So far, the stories feel like a combination of Popeye cartoons and the dark B pictures that used to play on TV on Saturdays when I was a kid.

Costigan is a merchant seaman who gets himself into fights and scrapes in every port.

The collection kicks off with Costigan in a Hong Kong saloon where he meets an old pal, encounters a beautiful woman and gets involved in the mystery of a missing jewel.

He and Bill McGlory, a guy he is either brawling with or palling around with, track the woman and get tangled up with a Chinese gangster. The trail leads to a fabulous compound which feels like a sort of maze as the sailors fight with guards and henchmen in dark mysterious rooms and closed-in courtyards that seem to magically appear out of Robert E. Howard’s pen.

In the next story, Costigan and his bulldog, Mike, are in a waterfront dive in Singapore when some tough, sporting types want Costigan to enter his pet in an organized dog fight with a notorious killer pooch. Costigan tells them to forget it, but someone kidnaps Mike and Steve fights his way through the city looking for the animal.

He offers a reward for his stolen dog and plans to raise the money by stepping into the boxing ring and winning the prize money. The fight is hilarious with Costigan battling but distracted with thoughts of who may have stolen his dog and worries about getting him back.

There is plenty of action and some very funny dialog peppered with cartoonish, phonetic seafaring words, and lots of 1920s-1930s slang.

The stories are fast, clever, and peppered with salty, but G-rated language, and funny observations as told in the first person by Costigan “hisself.”

By today’s standards, parts of the stories are either borderline to outright offensive. Howard was a writer of his time and I’ve got to believe he was not out to offend anyone, but to just tell a rip-roaring tale for the enjoyment of his readers.

For more on the boxing sailor, Steve Costigan, check out Paul Bishop’s post.

And for more posts on books, head over to Patti Abbott’s page.
Posted by Elgin Bleecker at 2:37 AM
Labels: boxing, Conan the Barbarian, Robert E. Howard, Steve Costigan stories