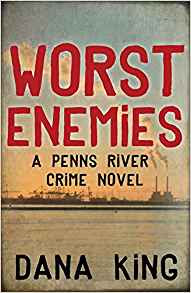 Worst Enemies, the last book I read before the close of the year, is on my short list of best reads of 2018.

It is the first book in Dana King’s Penns River series and introduces Detective Benjamin “Doc” Dougherty and the other cops in this fictional city in western Pennsylvania.

Doc and his partner, Willie Grabek, a slightly burned-out detective close to retirement, are called to the scene of a brutal homicide. A woman was killed in her home during a burglary gone wrong. Or, so the cops think.

The identity of the killer is revealed in the first chapter as Tom Widmer, a knucklehead who, while boozing in a strip joint, meets Marty Cropcho. The two share their problems and Marty comes up with a great plan to solve them. He tells Tom they should each kill the other’s wife in a Strangers on a Train type plan, and no one will ever connect them because no one knows they are acquaintances. Evidently these two never read the Patricia Highsmith novel or saw the Alfred Hitchcock movie.

With complete instructions on how to get into the house and just what to steal to make it look good, Tom Widmer goes first. But Widmer quickly learns it is not easy to kill a person. Marty Cropcho’s wife puts up one hell of a fight for her life, but loses in a brutally graphic scene.

The detectives soon have Widmer in custody when author Dana King pulls the rug out from under everyone. The case goes off in an unexpected direction. His story zigs and zags and speeds along following Doc as he tries to untangle a mystery that seemed so clear cut in the beginning.

King also provides a look into Doc’s personal life – his love life, his folks whom he visits every Sunday to watch the Steelers play football on TV, and his somewhat empty home life.

At times, the book feels like non-fiction thanks to King’s natural, realistic-sounding dialogue and the unusual surnames of many of his characters, including one police officer nicknamed Eye Chart.

The small city of Penns River comes to life as clearly on the page as any real place, complete with its wealthy suburb, a crumbling poor neighborhood, local taverns, chicken wing joints, and a veterans’ hall where old timers shoot pool and drink tap beer.