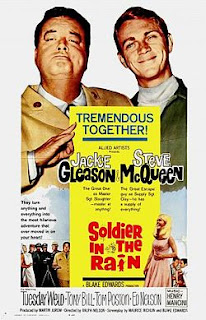 “Soldier in the Rain” is a memorable little black-and-white film from 1963 featuring the unlikely teaming of two super-stars of the day.

Steve McQueen, just coming off the success of “The Great Escape,” plays another military man, but a very different character. In this film, he is the goofy, good-hearted supply sergeant, Eustis Clay, who can seem dim and savvy at the same time.

Jackie Gleason, at the peak of his television fame, and an impressive screen presence in “The Hustler” and “Requiem for a Heavyweight,” plays Master Sgt. Maxwell Slaughter, a wheeler-dealer on a southern base in the peacetime army.

Eustis considers Maxwell his mentor. Maxwell sees Eustis as a resource for finagling the things he needs to make his life comfortable.

The movie is full of comic sequences, some taken directly from William Goldman’s novel of the same name, and some invented by writer-producer Blake Edwards.

Beneath the high jinks, the film’s heart is in the friendship between these two men. Maxwell will help Eustis out of any bone-headed scrape the younger soldier can get himself into. Eustis, understanding the sad loneliness of his 40ish friend, sets Maxwell up on a date with a local girl. Unfortunately, the date is with Bobby Jo Pepperdine, a teenager, played by Tuesday Weld, who has nothing in common with Maxwell and is only going out on a double date as a favor to Eustis. But Maxwell and Bobby Jo develop an easy, platonic rapport.

The three stars were perfectly cast. Not only do they inhabit their parts well and play off one another beautifully, but also they seem to have been in Goldman’s mind when he wrote the book (not that movies have to match an author’s description of a character).

Director Ralph Nelson expertly guides McQueen and Gleason through a picture that moves back and forth between comedy and drama, slapstick and bar fights, clowning and tragedy. Nelson, a TV veteran, directed his first film, “Requiem for a Heavyweight,” in 1962, with Gleason in an important supporting role to Anthony Quinn. The following year he not only directed “Solider in the Rain,” but also “Lilies of the Field,” for which Sidney Poitier won an Oscar.

"Soldier in the Rain" is well worth a look as a comedy, as a drama, or just as an excuse to see McQueen tooling around in a big old convertible, or to watch Gleason calmly smoking at his desk while conning the brass.

(A companion piece to this post about Goldman’s book is on this site and at Friday’s Forgotten Books, Patti Abbott’s weekly roundup of good reads.) 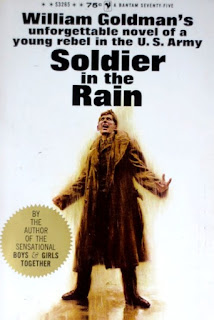 Solider in the Rain is a 1960 novel by William Goldman about a simple army sergeant on a base in the American south, his two far more educated buddies, and one young local girl.


On the surface, the story would seem to be a comic novel, but there is a lot more heart to it than that label would give it.


Supply Sgt. Eustis Clay has ambitions to be rich and famous when he gets out of the army. His problem is that he has no idea how to go about it. But that does not stop him from generating all sorts of ideas and weighing the possibilities. One line of work he considers is broom balancing – the end of the handle on his palm and the brush in the air – something he does better than anyone and practices when he has nothing to do while on duty in his supply office. He abandons the idea when he cannot find a way of turning his pastime into a money-making business. Eustis fancies himself a songwriter and believes his future may lie there, even though his songs are hilariously bad.


Eustis sounds too dim to root for, but he has some redeeming qualities. He overcame a childhood tragedy, loves his dog, is a loyal friend, is considerate to the local girls, and is consistently cheerful.


He looks up to his 40ish friend, Master Sgt. Maxwell Slaughter, a base wheeler-dealer. Eustis considers Maxwell his mentor. At first, Maxwell seems to tolerate Eustis' buffoonery in order to use him to procure goods from the supply office which Maxwell trades for items like an air conditioner for his office and his own personal vending machine. As the story progresses, Goldman shows the supremely confident Maxwell is a man with deep doubts and fears, which Maxwell only reveals to his friend, Eustis.


In his own naïve way, Eustis tries to help Maxwell by setting him up on a date with a local beauty named Bobby Jo Pepperdine, who hangs around the base and has had many intimate boyfriends despite being only 14 years old.


Maxwell, a gentleman and a guy with a lot of problems, develops a platonic rapport with Bobby Jo, which makes for some loopy, yet touching scenes.


Another buddy is Private Jerry Meltzer, an Ivy League graduate, drafted during the Korean War, who, during the story learns to drink with Eustis, celebrates the end of the Korean conflict and his discharge from the army.


In one of the best scenes in the book, Jerry invites Eustis, Maxwell, and Bobby Jo to a party at a hotel in town hosted by his overbearing mother and snotty fiancée who have traveled south to get Jerry and bring him back to New York. Goldman’s excellent ear for dialogue is evident in this scene. The six characters in the hotel suite have such unique voices that Goldman barely needed to identify the speakers.


Solider in the Rain, was the then 29-year-old Goldman’s third novel, written a few years after he himself was discharged from the army. His style is lean and his portrayal of the hot, dusty base and the variety of people associated with it is well worth the read.


Shortly after its publication, Blake Edwards, the man behind the Pink Panther movies, turned the book into a screenplay and produced it as a film starring the surprisingly excellent Steve McQueen as Eustis Clay, the perfectly cast Jackie Gleason as Maxwell Slaughter, and Tuesday Weld as Bobby Jo.
Goldman went on to write Marathon Man and the screenplays for “Butch Cassidy and the Sundance Kid” and “All the President’s Men" and much more.
Posted by Elgin Bleecker at 12:17 AM 7 comments:
Labels: Jackie Gleason, Soldier in the Rain, Steve McQueen, William Goldman

“The Crooked Frame,” the live television play, is a fascinating example of TV in its infancy.


Freely adapted from William P. McGivern’s novel of the same name, with many changes and compressions to fit the 30-minute time-slot of the CBS series Suspense, this 1952

episode drains almost all the mystery and – OK – suspense, out of the story.


So, what is so interesting about it?

First, the show was directed by 27-year-old Robert Mulligan, who labored for years in live television before directing movies. Ten years after doing “The Crooked Frame,” he directed Gregory Peck in “To Kill a Mockingbird.” Mulligan, here, seemed to have a cast of stage actors who did not quite grasp the concept of acting for the camera. The only exception was…


The second interesting thing about this show: Actor Richard Kiley. Kiley, who later won a Tony for Broadway's "Man of La Mancha," here, at age 30, had done a fair amount of TV work and a movie or two, and he plays the lead in a style far more suitable to…


The third interesting aspect of the show: The staging and camera work. Mulligan, like other directors of live television dramas in those days, kept his actors close to the camera. Sometimes his blocking is almost comically tight, clustering his players together into a sort of football huddle. Most likely, this was to keep the actors' faces visible on the small screens of early television sets. But Mulligan is also clever in his staging and in the freewheeling way he wheels his camera in and around and through the tiny sets.


All in all, a fascinating look at early television and a fairly harmless presentation. But be warned: If you have not read the book, this ancient video will spoil the plot. So, read McGivern’s novel first.


(A companion piece to this post, about McGivern’s book, is on this blog and at Friday’s Forgotten Books, Patti Abbott’s weekly feature, hosted last week by Todd Mason.)

The tone and pace of “The Scar” help suspend disbelief that this man could not only kill and take the place of the psychiatrist, but also do it without anyone ever noticing that he is a different guy. Henreid, who plays both parts, lends a suave intensity that drives the 83-minute film. The cast of supporting players all think bad-guy Henreid is actually head-doctor Henried, however, it is a stretch to believe that the shrink’s own secretary, played by Joan Bennett, who is also in love with the doc, would not notice the switch.

“The Scar” was directed with much style by Steve Sekely, a Hungarian filmmaker in Hollywood since the late 1930s. Sekely was able to build tension and create a genuinely creepy atmosphere in the picture, especially in a stomach-turning sequence in which Henreid, in order to convincingly switch identities, must give himself a long scar on his cheek. He sits before a mirror and sets out his medical instruments, which, under the expressionistic lighting of the great cinematographer John Alton, take on a sinister personality of their own: a scalpel, a vial of numbing agent, and a sickeningly large glass syringe. His tools in place, Henreid sets to work on himself.

This film shows director Sekely had talent. He might have become one of the great auteurs of film noir. (Wonder why he didn’t?)

“The Scar” is a fun little noir, and that scene of creating the scar is worth the price of admission (which is free, since “The Scar” is available on YouTube).

Under its other  title, “Hollow Triumph," the film is scheduled to show Friday, June 19, on Turner Classic Movies.