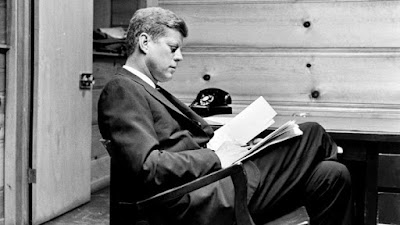 From Russia With Love by Ian Fleming 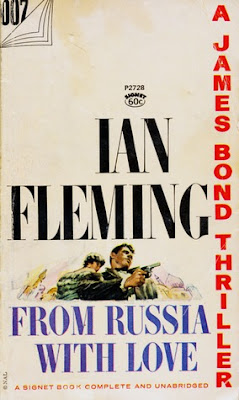 A lot of years have gone by since I last read anything by Ian Fleming. The last was Thrilling Cities, a non-fiction collection of travel essays. I found a paperback copy in a used-book store in the 1990s. But I could not tell you the last time or title of one of Fleming’s James Bond stories.

Something on-line triggered an urge to dig out my paperback copy of From Russia With Love.

Fleming’s 1957 book featuring British agent “Double-O-Seven” was far better than I remembered the series. Of course, when I first read his novels I was interested only in the adventure and the hot parts.

From Russia With Love is still a damn good adventure, but by today’s standards, the hot parts are pretty tame.

Interestingly, in his fifth Bond story, Fleming does not bring his main character on stage until about one-third of the way into the book.

The opening chapters describe Red Grant, or Granitisky, as the Russians call him, the immensely strong, murderous psychopath who defected to the U.S.S.R. in the 1940s and whom the Soviets use as an assassin.

The scene then switches to the Kremlin where the heads of intelligence, the secret police and other agencies hatch a scheme to upset the British Secret Service and to throw a scare into their own people to keep them in line. Fleming obviously knew his stuff when laying out the functions of the agencies inside the walls of the Kremlin. Another reason for the plotted attack on the British was the Soviets' embarrassment over recent defections to the West. Fleming has the Russians fuming over the defections of Tokaev, a real-life rocket scientist, and Khokhlov, an actual KGB officer.

The Soviets' plan is to lure a top British agent into a trap and kill him. This agent must be a top man, one with a double-O rating. The one they choose is 007, James Bond. The two lures they use are a portable decoding device and a beautiful young Russian woman working as a government clerk.

When Fleming brings Bond into the story, the agent is between assignments and bored. His days are a dull routine of going to the office, doing paperwork and attending meetings. He is itching for action.

Bond gets his wish when his boss, M, tells him about a Russian woman assigned to a Soviet office in Istanbul who wishes to defect to the West and will bring with her one of the decoding machines. Bond and M know it is a trap, but they want the device, so Bond goes to Turkey.

In Istanbul, he meets Darko Kerim, head of the British secret service branch in Istanbul, and a lovable, middle-age, bon-vivant and ladies' man.

A local organization working with the Russians has targeted Karim for assassination and tried to blow up his office. Luckily, Karim was not sitting at his desk at the time, but was over on the couch engaged in a nooner and the blast only heightened the climax.

Some of the absurdities Fleming put into the book, like the submarine periscope installed to peek into the Soviet headquarters in Istanbul, are fun without knocking the story off track. Fleming tempered the joke of the periscope with Bond’s and Karim’s journey too it through a rat-infested tunnel.

Quite a bit of the book found Bond in grubby environs and eating unappetizing foods. When Bond arrives in Istanbul, he checks into a once grand hotel with a great view but which fell into decline and now is a dump. After his first night there, Bond wakes with bed-bug bites. The book is not nearly as glossy as the movie made from it.

A bit of Bond trivia: From my reading, Bond is older than might be assumed. Fleming says Bond came to work for the secret service in 1938. Others speculate Bond was born around 1920. That would make him 18 when he joined. Fleming also notes that he went to college in Switzerland. Bond may have been recruited into the service as a student, but I saw him as older. From Russia With Love takes place in 1955. I pictured Bond in his late 30s or even 40, which made his encounter with Red Grant all the more dangerous.

Revisiting the Bond books today, made the Cold War seem like ancient history. It has been 30 years since the Berlin Wall came down and the Soviet Union started coming apart. Fleming wrote his series of spy novels about 30 years prior to that. So, it is pretty old stuff. But the writing is still crisp and the From Russia With Love is still a page-turner.

(And, if you enjoy fast-paced stories, please check out my book, Lyme Depot. Thanks.)

(For more posts on books, head over to Todd Mason’s blog.)
Posted by Elgin Bleecker at 10:39 AM 6 comments:
Labels: From Russia With Love, Ian Fleming, James Bond

3 Questions for the 4th 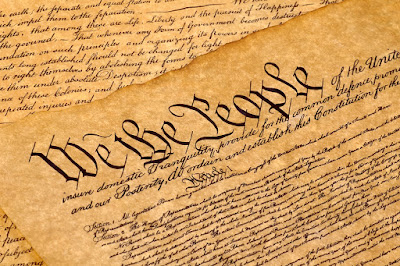 Here is a short quiz for this Fourth of July :

How many words are in the Declaration of Independence?

How many words are in the U.S. Constitution?

How long would it take to read both documents?

Exact numbers are not necessary. Close estimates will count.

Arriving at the exact number of words can be a little tricky. Some count only the body of the texts. Others include the signatures on the documents. With the Constitution, some count all the original passages, including those later amended. Others do not.

So, instead of exact numbers, I will give you some easy to remember estimates:

There are about 1,450 words in the Declaration of Independence, including the signatures.

There are about 8,500 words in the Constitution, including the amendments.

Together, they would take an hour or so to read.

To see a 2009 video of celebrities reading the Declaration, click here.