I Wake Up Screaming by Steve Fisher 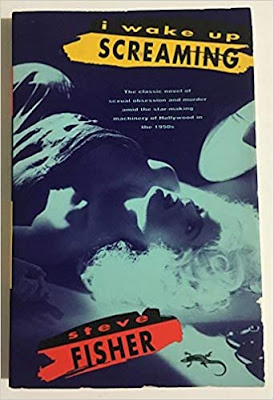 For some reason, author Steve Fisher rewrote his 1941 novel, I Wake Up Screaming, and republished it in 1960.

Sources on-line say he wanted to update the book from the early 1940s to the late 1950s.

This is the beginning of the 1941version:

It was a hot Saturday night and I wore white flannels and one of those blue sport shirts and sat in the Roosevelt Hotel’s Cine-Grill drinking Bacardis. The bar stools were white leather, and the wall decoration was a maze of old film cuts blown up – Charlie Chaplin, Jackie Coogan, Milton Sills, Harold Lloyd, Wallace Beery and like that. Across the street at The Chinese they were having a minor premiere of the newest Dr. Kildare picture. Arc lights were swinging back and forth, limousines arriving, and cops holding off the crowd.

And this is the update:

It was a hot Saturday night and I had on a Sy Devore suit and a hand-knit tie and sat at the bar in Mike Romanoff’s drinking Canadian Club old fashioneds. The bar stools were leather and the wall decorations had that ultra look and Zsa Zsa Gabor was at a closeby table, her head thrown back in laughter, and Gary Cooper and Bing Crosby and Bill Holden were at other tables and a couple of blocks away, on the corner of Wilshire and Beverly Drive, they were having a premiere for the latest Jerry Wald epic: arc lights swinging back and forth, limousines arriving, and cops holding off the crowd.

A lot of pop references are different in the later work, but the story is essentially the same.

I Wake Up Screaming is about a young writer working at one of the big studios who meets Vicky, a beautiful young woman who also works there. They start going out together, but Vicky is murdered and the police jump to the conclusion that the writer did it.

One detective, Ed Cornell, has it in for the writer and makes no secret that he wants to put him in the electric chair. Cornell is a ghostly presence, he looks like death, skeletal, pale and sickly. The man is dying and knows this is his last case and promises to live to see it through. Cornell shadows the writer and appears out of nowhere in unexpected places to haunt the writer.

Fisher does an expert job of plunging the reader into the dark, murky, nightmarish world in which the writer finds himself.

“The Midnighters” is a Movie to See 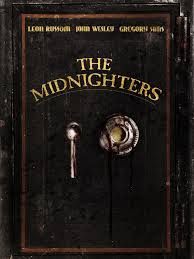 Until recently, a little crime film from 2016 called “The Midnighters” was unknown to me.

It is the story of Victor, an older man who spent the last 30 years in prison. No sooner is he released than he is pulled back into crime.

The guy pulling him is his adult son. The son is mixed up with some very bad guys who want to pull off a big heist. All the son and his cohorts need is an ace safe cracker. That is where Victor comes in.

Leon Russom plays Victor and he is terrific. In fact, all the acting in this picture is top notch.

“The Midnighters” was written and directed by Julian Fort, and for a first feature, it is extremely well done.

The Sins of the Fathers by Lawrence Block 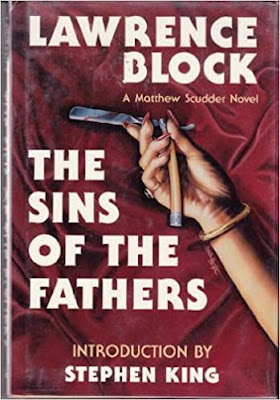 Forty-five years ago, master craftsman Lawrence Block kicked off his long-running series of novels featuring Matthew Scudder with The Sins of the Fathers.

The compact book starts with hard drinking, former cop turned unlicensed investigator, Scudder in a bar and meeting with the father of a murder victim.

A young woman was slashed to death in her Greenwich Village apartment. The man she lived with was found moments later out on the street, covered in blood and shouting obscenities. The guy was arrested and taken to the city detention center called the Tombs where he committed suicide. Case closed, as far as the police were concerned.

But the father, who had lost touch with the girl when she dropped out of college, pays Scudder to find out what his daughter’s life had been like in the past few years. The newspapers called her a prostitute.

Scudder learns the girl had been a prostitute, the man she lived with could not have killed her and the case was not resolved.

Block’s prose is tight and his dialogue natural. This lean book provides readers with everything they need to know about the girl, the father, the suspects, and about Scudder, including why he quit the force.

The Sins of the Fathers, with its blunt descriptions of sex and death is still hot read today.

There are 11 novels in the Scudder series, which you can see at Lawrence Block’s website. Over the years, I’ve read a bunch of them, but not in order. Now, I plan to work my way through the books.
Posted by Elgin Bleecker at 11:30 PM 1 comment:
Labels: Lawrence Block, Matthew Scudder, The Sins of the Fathers


Last week, I posted a piece about A. I. Bezzerides’ hard-boiled 1949 novel of independent truckers, Thieves’ Market.

The same year the book was published, 20th Century Fox released a film version of the story re-titled, “Thieves’ Highway.”

Bezzerides, in an interview, said the studio did not want to offend the city of San Francisco by using the original title.

The producers made other changes as well, the biggest of which was making Nick Garcos a hero rather than the nasty anti-hero of Bezzerides’ book.

In the film, he no longer steals from his mother to set himself up in the trucking business, but becomes an independent hauler partly as an act of vengeance to right a wrong done against his father.

With the revisions to the character, the studio cast one of its up and coming players, Richard Conte, in the role. Conte was a good – if underrated – actor. He later slipped into supporting roles, perhaps because his stoic demeanor fell out of style with the influx of emotionally charged Method actors arriving in Hollywood.

Lee J. Cobb, a gruff stage actor (he played Willy Loman in the original Broadway production of “Death of a Salesman”), was cast as the crooked produce buyer who attempts to hijack Nick’s load. Cobb was great in this kind of part. He also played the union boss in “On the Waterfront.”

Millard Mitchell, a character actor who usually played sheriffs and generals, was cast against type as Nick’s unscrupulous and untrustworthy partner, and he does a great job.

Valentina Cortese played a hooker with the heart of gold who is hired to distract Nick while the buyer commandeers his load.

Jules Dassin directed the picture in an almost documentary style. Dassin at that time was known for making tough, hard-boiled films like “The Naked City” and “Brute Force.” Later, after being blacklisted, he directed the heist film “Rififi” in France, and the comedy-heist film “Topkapi” in Greece and Turkey.

Bezzerides may not have minded the changes the studio demanded of his book since he has the solo credit for writing the screenplay. Besides, “Thieves’ Highway” was a lot closer to the book than the Warner Bros. production of his 1938 novel about truckers, Long Haul, re-titled, “They Drive by Night.” But that is a story for another post.
Posted by Elgin Bleecker at 8:48 PM 1 comment:
Labels: A.I. Bezzerides, Brute Force, Jules Dassin, Lee J. Cobb, Long Haul, Naked City, Richard Conte, Rififi, They Drive by Night, Thieves’ Highway, Thieves’ Market, Topkap
Newer Posts Older Posts Home
Subscribe to: Posts (Atom)