Bogart, Lupino, and a dog in High Sierra

The 1941 Warner Bros. movie, “High Sierra,” is a film I have seen many times and never get tired of watching.

It is the story of paroled gangster Roy Earle who travels west to lead some young wannabe bad guys in the robbery of an upscale California resort.

The movie, which closely follows the plot of the book, was written by Burnett and John Huston. Raoul Walsh, an expert with action pictures, directed.

Humphrey Bogart got the role of Roy Earle and it was perfect casting. The rest of the players are likable, but not too convincing in their parts, with two exceptions.

Ida Lupino, is nothing like the tough, dime-a-dance girl described in the book. But she is such a fine actress it doesn’t matter. Her scenes with Bogart are the best in the picture.

The other exception is the well trained actor who played Pard, a little dog who takes a liking to Roy Earle and follows him around.

The last time I watched the movie, I noticed how fond Bogart seemed to be of the dog. Then I learned it was Bogart’s own pet, a dog named Zero. Bogey could hardly stop smiling every time he had a scene with Zero.


The dog was quite a performer, too, and could do any number of tricks on command, including escaping from a locked room through a partially open window. 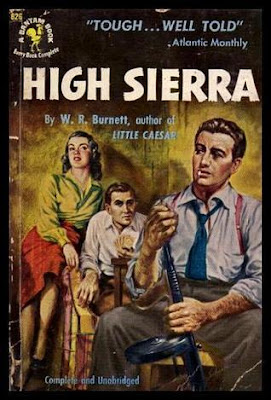