FFB Spies of the Balkans by Alan Furst 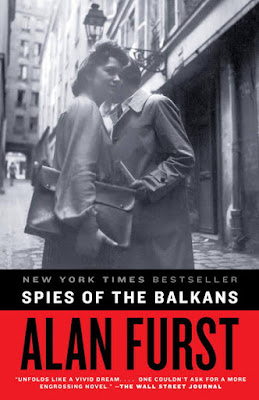 Since the late 1980s, Alan Furst has built a big reputation writing novels of intrigue and espionage set in Europe just before and during World War 2, and Spies of the Balkans from 2010 is another terrific story from him.

In 1940, when much of Europe is at war with Nazi Germany, Greeks were hoping to stay out of the war. But some knew the conflict was inevitable.

In the northern Greek city of Salonika, police detective Constantine Zannis is the go-to guy for sensitive assignments like finding out what a mysterious German is doing in town, or making an indiscreet politician's irate lover quiet down and stop making a public spectacle.

Zannis at heart is an honest cop with a conscience, and that conscience is put to the test when a German woman recruits him to help her smuggle Jewish refugees out of Germany.

His task is to set up a network of safe havens in nearby countries and into Greece where the refugees can catch international ships to neutral countries. Zannis takes on this job which requires him to travel in and out of Greece and into some dangerous cities where an underground network of petty criminals will assist – he hopes – for a price.

The price is met by a wealthy Greek shipping tycoon and friend of Zannis’ police boss. The tycoon has a beautiful young wife, and as if Zannis is not in enough danger defying the Nazi’s and dealing with gangsters, he falls in love with the rich man’s wife and begins an affair.

Spies of the Balkans is a well written, well researched, compelling and topical read during this time when thousands of refugees escaping war are trying to reach safe haven through the same part of the world.
Posted by Elgin Bleecker at 11:04 AM 3 comments:
Labels: Alan Furst, Spies of the Balkans

Watching “Vacancy” was the most fun I have had sitting through a horror movie.

Fun is a strange word to use with this genre, a category I rarely choose for my viewing pleasure. The humor comes from the small but excellent cast in this 2007 film.

Luke Wilson and Kate Beckinsale play a married couple lost on a dark, deserted stretch of rural two-lane highway. Their car breaks down and they choose to stay at a dumpy motel run by Frank Whaley. Up to this point, the movie plays like a close cousin to Hitchcock’s “Psycho.”

Soon Luke and Kate suspect they are the intended victims of some local psychos who aim to beat, abuse and kill them while recording it all for a snuff film. Here the movie turns into a close cousin of “The Texas Chainsaw Massacre.”

Despite the low-rent premise, the movie is exciting and scary. It is also funny thanks to Wilson and Whaley. Beckinsale, one of the best actresses we have, is also very good here, and I have never seen her less than terrific since first seeing her in Kenneth Branagh’s Shakespeare film, “Much Ado About Nothing.” Her terror seems genuine and her humor comes from her bitter rapport with Wilson (at least I found their banter funny.) As their situation grows more serious, the laughs are of the nervous kind as we, the audience, are a little ahead of the couple because we know this is a horror film.

“Vacancy” was directed by Nimrod Antal, a filmmaker new to me, who has made half a dozen features in a dozen years.

I can recommend this film to those who like this kind of picture and to those having a tough week and who want to kick back and forget their own problems for 85 minutes.
Posted by Elgin Bleecker at 5:57 PM 5 comments:
Labels: Frank Whaley, horror, Kate Beckinsale, Luke Wilson, Nimrod Antal, Suspense, Vacancy
Newer Posts Older Posts Home
Subscribe to: Posts (Atom)