Film Noir: The Street With No Name 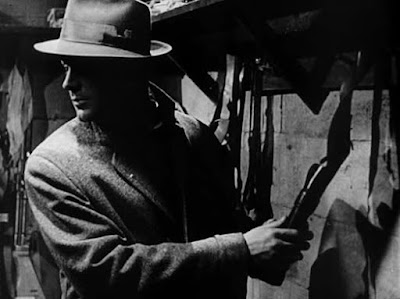 “The Street With No Name” is a great noir title of a good noir movie. It comes from a mid-century statement by then FBI chief J. Edgar Hoover.

This 1948 film features Mark Stevens as Cordell, an agent sent into a city to find and infiltrate a criminal gang run by Stiles, played by Richard Widmark.

With the help of a phony criminal record, Cordell edges his way into the gang.The gangsters have been so successful, Cordell learns, because Stiles has a crooked cop on his payroll providing all sorts of valuable information. As Cordell closes in on Stiles and his contact, the contact and Stiles become suspicious of him. All this leads to a tense climax with Stiles setting up Cordell to be killed.

A decade earlier, a conclusion like that would have had no suspense at all. But “The Street With No Name” was made in the post-WWII, film-noir era, when anything could happen, including the death of the hero

Of the sub-genres of film noir, “The Street With No Name” would fall into the category of docu-noir. Much of the film was shot on location, giving the picture and extra gritty feel. The dark, shadowy look of the film is courtesy of cameraman Joe MacDonald.

Veteran Hollywood director William Keighley, kept the whole thing moving at a rapid pace that never let up. Sometimes, the tempo and the jaunty acting of the gang had the slick, fast-paced feel of a 1930s Warner Bros. movie. Not a bad thing, very entertaining, but not really in keeping with the tension of film noir. This is a minor quibble considering Keighley cranked out many films at Warners in the ‘30s. 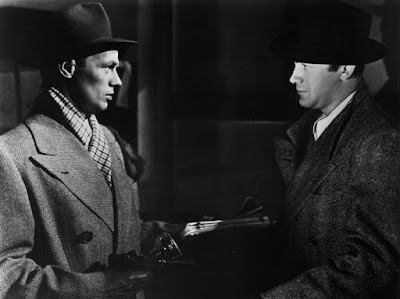 “The Street With No Name” is an above average crime picture with many good scenes between stars Stevens and Widmark. And, thankfully, director Keighley restrained Widmark from doing his manic giggle, which the actor used to great effect in “Kiss of Death,” but then overused in several subsequent films. Widmark was a fine actor who could portray cold-blooded villainy as well as cowardly panic better than most of the actors of his era. Mark Stevens seemed to have a spotty career. In the 1950s, he went on to act and direct in television. He also made an interesting noir Western called “Jack Slade."

Also featured in “The Street With No Name” were Lloyd Nolan as Cordell’s FBI superior, John McIntire as another agent on the case, Ed Begley as a senior police official, and Barbara Lawrence in the thankless role of Stiles’ wife, who spends all her scenes being abused verbally and physically.

(For more posts on film and television, check out Todd Mason’s blog.)
Posted by Elgin Bleecker at 10:21 AM 1 comment:
Labels: Film noir, Mark Stevens, Richard Widmark, The Street With No Name, William Keighley 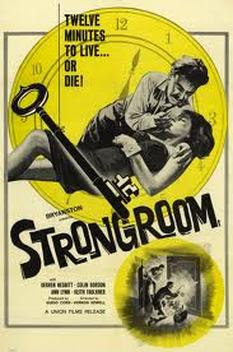 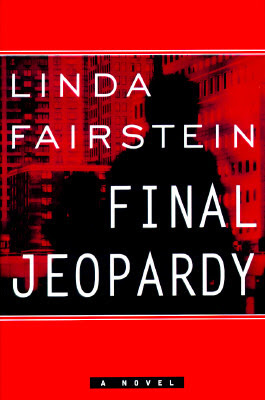 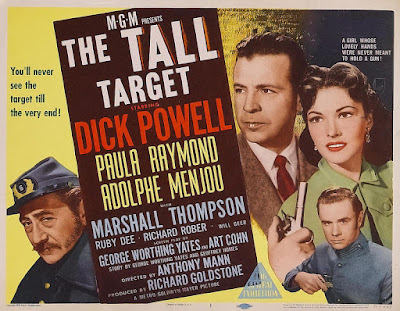 It is the story of a New York police detective in 1861, who gets wind of an assassination plot against the newly elected president, Abraham Lincoln, and rushes by train toward Baltimore to intercept Lincoln, who is headed for Washington, D.C., before the plotters can get to him.

The detective, John Kennedy, is played by Dick Powell. Powell at that time in his career made a successful transition himself, from juvenile lead in Warner Bros. musicals to film-noir tough guy in movies like “Murder, My Sweet.” 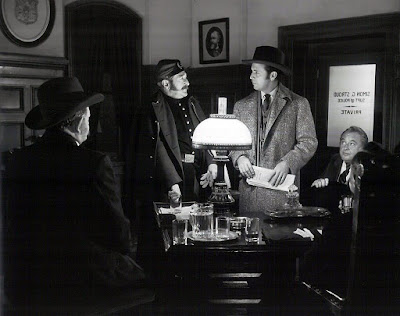 Much of “The Tall Target” takes place on a train. Its passengers are the suspects. Many of them are Southerners traveling back to their home states.

Actor Marshall Thompson plays a West Point cadet who has resigned to join the Southern cause. He is traveling with some serious weapons, his worried sister, her maid, a young slave woman, played by Ruby Dee.

Also on board is a uniformed Northern militia major, played by Adolphe Menjou, a politician who glad hands Kennedy, but seems only to help if he himself can benefit.

Will Geer plays a tough but tolerant train conductor who grows weary of the many hassles and scrapes detective Kennedy finds himself in. 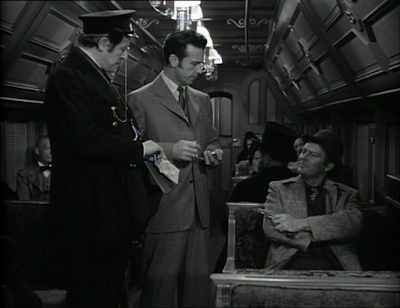 Leif Erickson, a large actor with a booming voice, plays a dangerous baddie in a startling turn in the film.

This small, dark, 78-minute movie from 1951 is filled with complex characters, and while it has some hokey moments, it is mostly a taught, well-made and suspenseful mystery.

Credit goes to Anthony Mann for the pacing, the tension, and the look of the film. Here he worked with cameraman Paul Vogel with great results. But at that time, Mann often worked with John Alton who shot some of his great noirs like “Raw Deal,” “T-Men,” and “Border Incident.”

“The Tall Target” is an average title for an above average film.

There is a British movie I saw on television as a teenager and never saw again until recently. But all these years later, two things about the film stuck in my mind. One was the exciting climax of the picture. The other was actress Samantha Eggar.

The movie, “The Wild and the Willing” from 1962 (also called “Young and Willing”), is the story of a group of men and women at an English college, their friendships, their love affairs and their ambitions.

The main story is an “angry young man” tale which does not hold up too well. Harry, played by Ian McShane in his first movie, is a working class lad who earned a scholarship to the college, but who bridles against the institution and the older generation in charge. He believes the professors look down on him and will never accept him.

Harry comes across as a spoiled crybaby. What has he got to complain about? He can do the work. His teachers do not like him, but admit he is smart – smarter than the other students, smarter than some of the instructors. Harry is popular with classmates. And he has a beautiful, intelligent, and level-headed girlfriend, Josie – played by Miss Eggar. He also has a scholarship. I repeat myself, but that one gets me. Today, anyone in college or putting a kid through school would jump for joy at the prospect of a free ride.

The “angry young man” cycle started with John Osborne’s 1956 play, “Look Back in Anger,” which was made into a 1959 movie, and continued for a few years with films like 1960’s “Saturday Night and Sunday Morning.” Unlike the main characters in those dramas, Harry, is not stuck in a dead-end job nor facing a dull future.

The other puzzling thing about Harry is why Josie wants to be with him. Samantha Eggar is a good actress and she plays the attraction for Harry very well. All the acting here is fine, it is the script that is at fault.

Other, parallel stories are of Andrew, played by Jeremy Brett, a student having an affair with a professor’s wife, and Phil, played by John Hurt, an introverted, socially awkward guy, who looks up to his dorm roommate, Harry.

When Harry decides to pull a dangerous stunt by climbing the exterior of a stone tower, Phil insists on going with him, to prove himself. The climb is a sweaty-palm sequence.

Despite its faults, “The Wild and the Willing” is an entertaining film from the team of director Ralph Thomas and producer Betty E. Box, with a script by Nicholas Phipps and Mordecai Richler, from a play by Laurence Doble and Robert Sloman.

The young cast makes this picture go. Along with McShane, it was the first movie for Samantha Eggar, John Hurt, Jeremy Brett (although some sources say he appeared an earlier film), and others who will be familiar to viewers of English films and television.