Moive “A Man’s Head” from a Georges Simenon novel 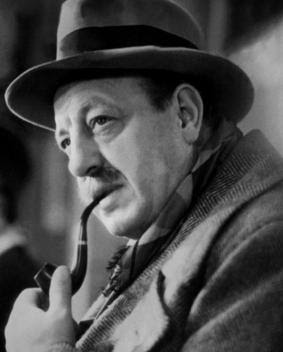 A couple of weeks ago, I posted a piece about one of Georges Simenon’s best novels featuring Paris police Superintendent Jules Maigret. (The post is here.)

Days after finishing the book, I had the chance to see an early French production of one of the Maigret books.

The 1933 movie, “A Man’s Head” (“La tête d'un homme”), was well made and had just about the best Maigret I have ever seen playing the part of the detective.

The movie takes its time before bringing Maigret into the story. It starts in a boulevard cafe where a broke bon vivant muses out loud that he would pay 100,000 francs to have his aunt killed so he could inherit her money. Moments later, a note is slipped to the man from someone taking up his offer.

The criminal is engaged and a man supplied with a key and map of the old lady’s house enters only to find the woman dead. The wannabe killer has a sneaky accomplice who tells his frightened partner to leave town and hide while he cleans up any clues. The first man runs but the second man cleans up nothing, giving the police all they need for an arrest.

But Maigret sorts things out and before arresting the real murderer spends time with the second man to understand him and learn his real reason – beyond the money – for killing the old woman.

French actor Harry Baur played Maigret and I do not think he ever played the Superintendent again, which is too bad.

Director Julien Duvivier, who was one of the best filmmakers of his era, captured the tone and pace of Simenon’s books, with some poetic realism and a dash of German Expressionism thrown in. This 87-year-old film still works.
Posted by Elgin Bleecker at 11:43 PM 2 comments:
Labels: A Man’s Head, Georges Simenon, La tête d'un homme, Maigret

Maigret and the Headless Corpse by Georges Simenon 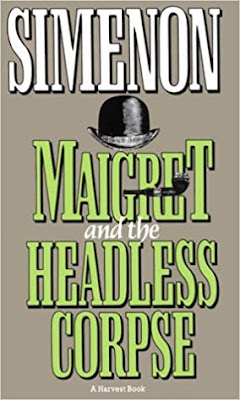 The first week of this month - which included Election Day - required a good, calm crime story, a book that before opening it a reader knows the mystery will be solved and order restored.

The mystery in his 1955 novel, Maigret and the Headless Corpse, as the title explains, begins with the discovery of a dismembered body in a canal. All the parts of the murdered man are recovered, except the head. Based on the medical examiner’s findings and the section of Paris in which the body was discovered, Maigret quickly comes up with a possible identity of the man and a possible suspect.

The suspect is the man’s wife. As Maigret learns about her, a second suspect and then a third come into focus. The wife is a puzzle to him. She is a woman who seems numb to the world and Maigret spends a considerable amount of time figuring out what makes her tick. His process is fascinating.

For a man who wrote at breakneck speed, Simenon’s novel has an almost leisurely pace.

Maigret and the Headless Corpse is considered one of Simenon's best, and I agree, although I have only read a fraction of his 390 books. Included in that output are his 75 Maigret novels.

(And, if you haven’t already, please see my book, Lyme Depot. Thanks.) 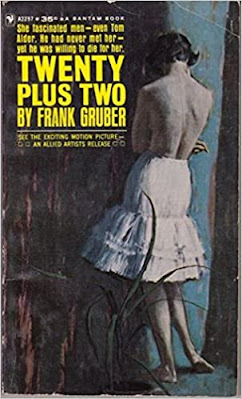