John Garfield in Pride of the Marines 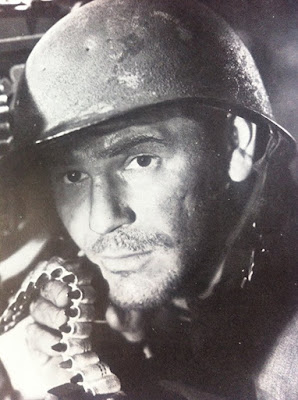 Yesterday was Memorial Day, a national holiday for Americans to reflect on the sacrifices made by our military men and woman, past and present.

On Memorial Day, I caught a picture I had heard about and watched clips of, but had never seen from beginning to end. The movie was “Pride of the Marines” from 1945.

Made during World War II, it was based on the true story of Al Schmid, a Marine whose heroism during the fighting on Guadalcanal in 1942 earned him the Navy Cross, but also cost him his eyesight.

The film is in four parts: Schmid and his budding romance with a hometown girl just before the war; Schmid in combat; Schmid recovering in a military hospital; and Schmid returning home. The first section is pretty corny by today’s standards, but, as was done in “The Deer Hunter,” it showed the characters before the war touched any of them. The second section, set mostly in a foxhole where Schmid and two other Marines fought off overwhelming attacks, was harrowing. The sweat and tension of these men anticipating a night raid and the violence and chaos of the attack was outstanding work by three actors – John Garfield as Schmid, Dane Clark and Anthony Caruso. Garfield was one of the finest actors of his generation.

Another outstanding sequence was Schmid’s resistance to being sent home from the hospital, accepting that he would never see again, and facing his fiancee. And there was a small but poignant moment when an African-American train porter told Schmid he had read about him Life magazine and that it was an honor to have him on his train. The porter then refused to take the tip Schmid’s buddy offered. The simplicity of the scene and the dignity of the porter and of the Marines made the moment memorable. Credit for it, and for the entire movie, goes to director Delmer Daves and writer Albert Maltz.

Daves, who had worked in Hollywood since the early 1920s, wrote and directed films across many genres, including the Humphrey Bogart noir, “Dark Passage,” and the original “3:10 to Yuma.” Albert Maltz was nominated for an Academy Award for his screenplay for “Pride of the Marines.” Two years later, Maltz was one of the “Hollywood 10,” writers and directors who refused to cooperate with the House Un-American Activities Committee, and was sent to jail.

Garfield, Daves and Maltz had worked together on the 1943 submarine war film, “Destination Tokyo,” and Garfield may have known Maltz from his New York days with the Group Theater.
Posted by Elgin Bleecker at 8:48 PM 1 comment:
Labels: Albert Maltz, Delmer Daves, John Garfield, Pride of the Marines

FFB: The Men From The Boys by Ed Lacy 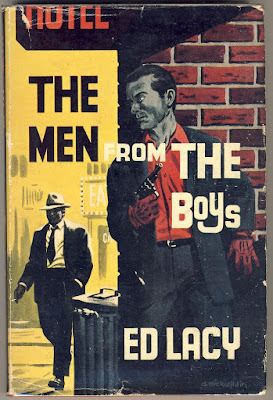 Back in February, George Kelley and James Reasoner, reviewed the same book on the same day, and that sent me hunting for Ed Lacy’s 1956 crime novel, The Men From The Boys.

I found a copy of this hard-boiled, noir novel of a thuggish ex-cop.

Once the toughest detective on the force until he was shoved out in disgrace, Marty Bond, now older and with many regrets, gets the chance to make some things right with one last case.

Lacy pulls no punches with Marty. He is not a good guy. Readers will understand him while not liking him.

This suspense story comes to an action-packed conclusion with a weird final scene. But that hardly matters. It was the characters, the lean, punchy writing style, and the cynical dialogue that kept me turning the pages of this short book.