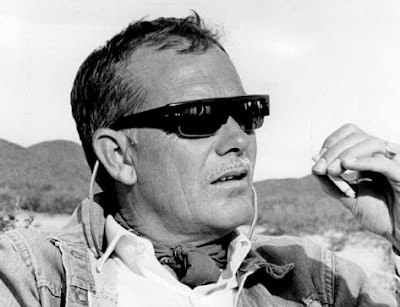 Sometimes an ancient TV series gives up some surprising gifts. One such program was Zane Gray Theater.

The show, which ran from Fall 1956 to Spring 1961, was an anthology series with weekly stories featuring different actors and scripted by different writers. This show is currently re-running on a cable channel called Grit TV.

Easily half the episodes of the series are really good. Unfortunately, the other half are pretty ordinary.

In “Trouble at Tres Cruces,” Keith, as wandering cowpoke Dave Blasingame, receives a letter from his uncle inviting him to his ranch for a visit and a look at new model of high-powered repeating rifle. But when he arrives, he finds his uncle killed and the rifle stolen by local strong-arm man, Nick Karafus, played by Neville Brand. Brand, another good actor, played the heavy in a lot of noir films, notably “D.O.A."

Blasingame and Karafus have a great showdown in which Brand plays the scene with such an evident code of conduct that despite being the villain of the piece he is completely understandable and almost sympathetic. It is pure Peckinpah.

The episode served as a pilot for Peckinpah’s series, The Westerner, also starring Keith as Blasingame. The Westerner went on the air in 1960 and was one of the most interesting and unusual westerns ever aired, which may be the reason it lasted a mere 13 episodes.

Peckinpah had better luck with a 1958 episode he wrote for Zane Gray Theater called "The Sharpshooter." This story, starring Chuck Connors and directed by Arnold Laven, was the pilot for the hit show The Rifleman, which ran for five seasons.
Posted by Elgin Bleecker at 8:34 AM 3 comments:
Labels: Brian Keith, Neville Brand, Sam Peckinpah, The Westerner, Trouble at Tres Cruces, Zane Gray Theater

FFB: The Westies and the story of Mickey Spillane 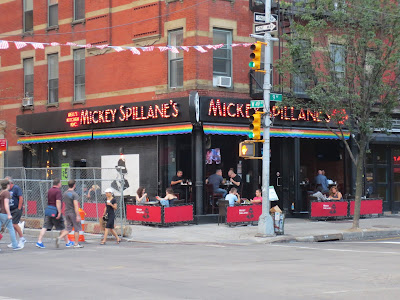 Ninth Avenue, between 42nd and 52nd streets in Manhattan was once the heart of Hell’s Kitchen, a rough, tough, section populated by the city’s working class.

Today, the neighborhood, which is bounded on the east by the theater district and the west by the Hudson River, now attracts crowds of young professionals, theater folk, and visitors to its many new restaurants and bars.

Walking up Ninth on a trip to New York City, one of those bars caught my eye. Mickey Spillane’s is at 49th Street and Ninth Avenue. Notable figures often put their names on drinking establishments, like Mickey Mantle’s bar on 59th Street. But Spillane’s in Hell’s Kitchen is not named for the famous writer of the Mike Hammer mysteries. There was another Mickey Spillane.

Michael J. Spillane was considered the boss of the west side in the 1960s and 1970s. It was said that he ran a predominately Irish-American gang that was later called the Westies, and allegedly ruled not only the neighborhood but also the piers that once thrived there. His reign ended when he was gunned down in 1977 at age 42.

Spillane, who was married to a local woman whose family dominated west side Manhattan politics, had a son, Michael J. Spillane, Jr. The son opened the bar several years ago and named it Mickey Spillane’s.

In 1990, journalist T.J. English published his book, The Westies, a non-fiction account of the history, violence and politics of Hell’s Kitchen.

English’s book is thoroughly researched and at times a first-hand account of the people he came to know through reporting on the area and from covering the trials of members of the Westies.
Posted by Elgin Bleecker at 11:04 PM 2 comments:
Labels: Hell’s Kitchen, Mickey Spillane, New York City, T.J. English, The Westies

Film: Lagaan, Once Upon a Time in India 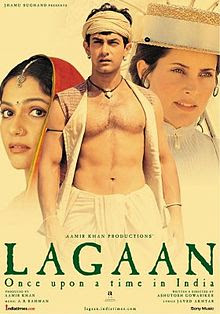 My on-line friend, Prashant, who writes a very good blog, was the first to call my attention to "Lagaan," an excellent movie from 2001. The picture, which received an Academy Award nomination as best foreign film, is available on DVD.

“Lagaan” is the story of a group of local lads from a farming village in 1893 who are challenged by the British military leader of the province to play a cricket match against his men. The stakes set by this arrogant officer are high: win the match, and he will suspend the taxes for the village and all the villages in the region for three years; but lose, and the taxes will be tripled.

Once challenged, there is no way to back out. Even if the British call off the game, the taxes will go up.

The man who sparks the challenge is Bhovan, a young farmer played by Aamir Kahn. Kahn, who also co-produced the film, is a superstar. He not only is a good, intense actor, but also a very physical actor. And he can sing and dance.

The singing and dancing comes into the movie several times, sort of like rock videos inserted into the film. While I found them unusual at first, they are very easy to take, move the story forward, and are a nice reminder that movies like “Lagaan,” even with its serious theme of occupation and oppression, are also entertainments.

The large cast of "Lagaan" includes the beautiful Gracy Singh, playing Gauri, Bhovan’s girlfriend, Paul Blackthorne as the arrogant Captain Russell, and Rachel Shelley as the officer's sister, Elizabeth, who secretly helps Bhovan and his team learn the game. Another standout actor in the film is Rajesh Vivek as Guran, the village soothsayer and fearsome crazy man with his wild beard and ferocious eyebrows. In fact, the whole cast is excellent under the direction of Ashutosh Guwariker.

The movie builds to the big, tense showdown between Bhovan and his ragtag team facing the experienced team of British officers. “Lagaan” is a big, glossy, well-done film, and at nearly 3 ½ hours, it never felt a minute too long. This one is well worth the time to find and watch.