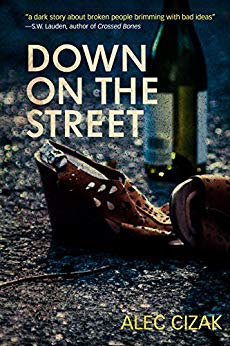 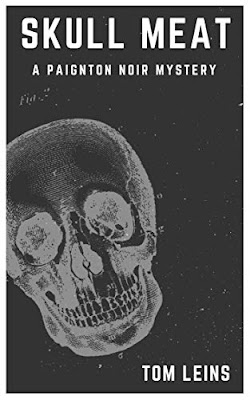 Last summer, I read Tom Leins’ astonishing novella, Skull Meat, and found myself at a loss for words. This short book has a driving pace and vivid descriptions. It also has some revolting, even horrifying passages.

So the question is: How do I recommend this?

And with a yellow and black hazmat sign slapped on it, warning readers they better have strong stomachs before opening this one.

Skull Meat is the story of Joe Rey, who might charitably be called a private investigator, but who is really just a guy who takes money to do dirty work. Joe is hired by a gangster to mess with a rival called “Swollen” Roland. And, as usually happens in noir novels, nothing goes according to plan.

The story is over-the-top harsh, brutal, violent, ugly, and yet amazingly readable.

Leins’ writing is magnetic, you cannot tear your eyes away from it no matter how awful the scene. And all of his scenes are an assault.

He told David Nemeth, “I wanted it to be a raw, nasty blast of dirty noir.” Skull Meat is raw. It is nasty. And he more than achieved his goal.

This is a new kind of noir.

In the old noir, readers went down mean streets under the safe guidance of Sam Spade, Philip Marlowe, and even Mike Hammer.

But in the noir of Skull Meat, there is no safety. Joe Rey will not protect you. Follow him at your own risk. But once you step into his world, Leins will have you following him right to the end.

I bought the Kindle version, and when it landed on the device I took a quick look. I did not set it aside until I finished the story. Others around the Web had similar reactions. Read the reviews by Colman Keane, Paul D. Brazill, Marietta Miles, and the Grim Reader.

Tom Leins set the story in the English seaside city of Paignton, which is also his hometown. After his seedy, sleazy, scary description of the place, it is a wonder the good folks of Paignton did not tar and feather him, and run him out of town a fence rail.
Posted by Elgin Bleecker at 12:04 PM 4 comments:
Labels: Skull Meat, Tom Leins 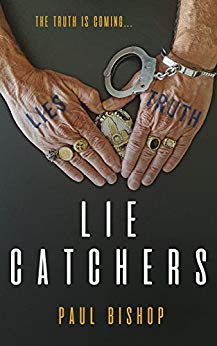 Lie Catchers is a fast read thanks to Bishop’s skill as a wordsmith. The cases are a puzzle, the action is quick and packs a punch, and the characters, situations, and work of detectives rings true, thanks to Bishop’s many years on the force. Paul Bishop is a retired LAPD detective.
Posted by Elgin Bleecker at 1:38 PM 4 comments:
Labels: crime novel, detectives, LAPD, Lie Catchers, Paul Bishop, police
Newer Posts Older Posts Home
Subscribe to: Posts (Atom)