James Cagney in "The Gallant Hours"

In it, Cagney plays World War II Admiral William “Bull” Halsey, who was put in charge of operations in the South Pacific when U.S. troops were fighting to hold off the Japanese sweep through the region.

For a war story, this 1960 movie has almost no action in it. All the action, drama and tension takes place in the admiral’s office on board his flagship. And, like the films “Command Decision," and “Twelve O’clock High,” the drama is the burden of command – the responsibility of one person to send others into confrontations where he knows they will be out numbered.

Cagney gives a great, highly restrained performance as Halsey. He even looks like Halsey. Cagney co-produced the picture with actor Robert Montgomery, who directed.

“The Gallant Hours” is a strange movie and it takes a while to get used to its style. The picture moves at a deliberate pace, and it has a good deal of narration in it, delivered by Montgomery. At times, it feels like a documentary as he fills in the background of various characters and incidents. It also has just about the strangest musical track of any film, provided by a men’s chorus singing a cappella.

But it is one of the best depictions of command, of how to take on an impossible assignment, assess it, weigh the risks, and take action.

Cagney is in nearly every scene and he is supported by an excellent cast that includes Dennis Weaver.
Posted by Elgin Bleecker at 7:39 PM 1 comment:
Labels: Admiral Halsey, Dennis Weaver, James Cagney, Robert Montgomery, The Gallant Hours 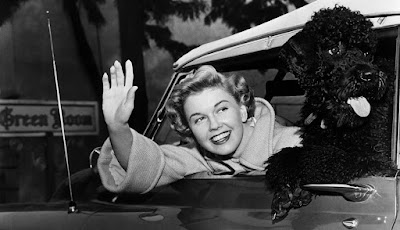 Posted by Elgin Bleecker at 10:55 AM 1 comment:
Labels: Doris Day, Love Me or Leave Me, Pillow Talk, The Man Who Knew Too Much

The Thirty-Nine Steps vs. The 39 Steps 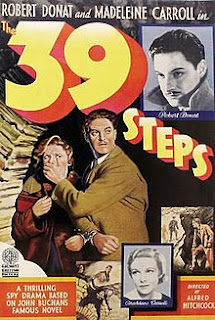 John Buchan’s 1915 novel, The Thirty-Nine Steps, is one of the grand old spy adventures of yesteryear and is still a pretty great read.

Most people will know the plot thanks to Alfred Hitchcock’s 1935 movie version, “The 39 Steps.”

A spy with information vital to the British government is killed in Richard Hannay’s apartment. The police think Hannay did it and hunt him down. The real culprits - enemy spies – think Hannay knows their secret plans, and set out to kill him.

Richard Hannay, with only a partial idea of their plans and a couple of clues, takes off for the Scottish Highlands to track down a man and get to the bottom of this mystery. He cleverly eludes both the cops and the killers while putting the story together. When he figures out enough of it, he makes his way back to London to inform the British military chiefs.

The novel, written and published during World War I, is set in the pre-war years but features German agents as the bad guys. The spies’ secret mission is to assassinate a foreign diplomat visiting England and stir up a lot of trouble for the British and to steal Naval secrets. John Buchan devotes a lot of ink to explaining the convoluted plans.

Hitchcock wisely collapsed the spy plot into a brief description, believing the audience did not need to know too much about it, other than that it is the thing Hannay needs to find out and the spies need to conceal. 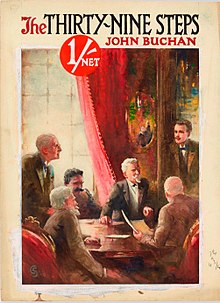 While condensing the spy plot, Alfred Hitchcock expanded the cat and mouse game between Hannay (played by Robert Donat) and the spies by adding an attractive young woman to the plot, Pamela (played by Madeleine Carroll), who does not appear in the book. John Buchan’s Hannay travels alone. Alfred Hitchcock’s Hannay has a lovely, if reluctant companion who, for a while, is literally handcuffed to him. Hitch has a lot of fun with this situation.

Alfred Hitchcock also gave the head spy a better physical trait for Hannay to discover and unmask the villain. But while eliminating some of the far-fetched aspects of the book, Hitchcock also added a bizarre element in the person of “Mister Memory,” a music hall entertainer with a photographic memory who the spies use to convey secret military plans. Mister Memory is not in the book.

The book keeps the action going with Hannay bursting in on a meeting of British military chiefs to tell them of the spies’ plans. That Hannay could arrive where the brass is meeting, be allowed in, and have those men listen to him, seems absurd now, a century later. Maybe it was absurd then, too. Perhaps the book’s Richard Hannay could do it because he is a wealthy, educated man who by his mid-30s had made a fortune in Rhodesia and settled in London to live a life of leisure – and boredom – until this all happened.

Informing the officials of what he has learned is not the end of the book. Hannay has to catch the spies before they slip out of the country.

The Thirty-Nine Steps creaks a bit, but it remains an entertaining, fast-paced read.

(And, if you enjoy fast-paced stories, please check out my book, Lyme Depot. Thanks.)