Three Questions for Dana King author of Leaving the Scene 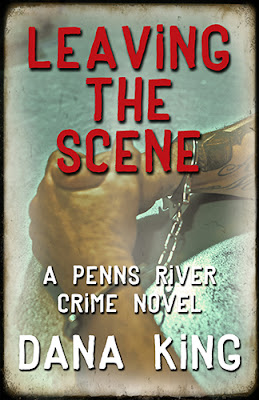 This month, Dana King published Leaving the Scene, the sixth book in his terrific Penns River series of police procedurals. I recently asked him three questions:

EB: Congratulations on the new book. Would you tell us about it and what the police in your fictional Pennsylvania town are facing?

DK: Leaving the Scene has two meanings in this book. Long-time Penns River police chief Stush Napierkowski has retired, so changes are afoot in the department. The new chief has to hit the ground running when a hit-and-run driver kills a woman. While the homicide takes up more of the story than anything else, mostly the book deals with the conflicting demands on the cops’ time, some humorous, others not.

EB: You’ve lived with your recurring characters for a while now. Does that make the writing easier? Or is coming up with a new story always a challenge?

DK: For me it’s easier; others’ mileage may vary. I like having a set cast I can draw from, as I know many of their strengths and weaknesses already. I’ll often get an idea for a story, or a side anecdote, and my first thought will be, “Sisler needs to answer this call,” or, “this can show the differing styles and personalities of Trettle and Burrows.” It opens things up for me. I also don’t have to use every continuing character in every book. It’s a little like the old Mission Impossible TV show, where Peter Graves would shuffle through the photos of his team to choose who he wanted to use this week. As for ideas, Penns River is based on a real place. I just have to read the paper for ideas.

EB: During the writing of any of your Penns River novels, or your Nick Forte P.I. series, have you ever painted yourself into a corner and had to figure a way out of it?

DK: Oh, yeah. Two times come to mind. In each I had to throw away tens of thousands of words and go back to a place where things were still on the rails and work from there. I once wrote over 30,000 words of a Nick Forte story, fighting it all the way, when I realized this wasn’t a Forte story; it belonged in Penns River. I threw away everything but one sentence and started over. (It wasn’t the opening sentence, either.) Not coincidentally, these are the only books I tried to write without outlines. Never again. The outline often changes as the book progresses, but I always have some kind of map working. Scrivener is great for that, especially if you need to re-arrange the order of chapters.

For more information about Dana King’s novels, check out his website, and keep up with him on Facebook or his blog.

Mairgret Has Scruples by Georges Simenon 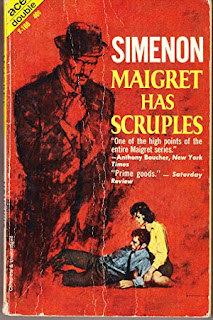 A big mystery in Georges Simenon’s, Mairgret Has Scruples, is: When is something going to happen?

But, wondering about that may miss the point of this 1958 novel featuring the fictional detective, Jules Maigret of the Paris police.

Here, solving a crime seems less important than understanding the culprit and the victim. In this case, no crime is committed until very late in the story.

Nearly three-quarters of the book is a series of scenes involving Chief Superintendent Maigret talking to a married couple.

The man comes to the station to tell Maigret he fears his wife is going to poison him. Later, the wife comes in to tell him her husband is nuts and possibly dangerous.

Several long talks with each follow, while, in the meantime, Maigret sends his detectives off to learn all they can about these people. It turns out the wife has a guy on the side and the husband is in love with his sister-in-law. Still, no crime has been committed.

Maigret briefs the city prosecutor and the lawyer warns him to drop it because there is no cause to be investigating this couple. But the chief persists, knowing he could wind up in legal trouble himself.

As usual with Simenon, this book is a bit of a magic act because not much happens in the 186 pages and yet every page is fascinating.

Maigret, who likes to study and understand the people he comes in contact with, is a study himself. The man is efficient, even swift when he has to be, but he can also be slow and plodding, pondering a case and worrying about the characters involved.

This and other Maigret novels feel almost leisurely. The chief even has time most days to go home and have lunch with Madame Maigret. Although she is used to him eating in silence as he puzzles out a case.

Georges Simenon (1903-1989) wrote 75 Maigret novels and 28 short stories. The prolific author also turned out many stand-alone novels. The numbers vary on just how many books Simenon wrote. Some estimate around 400, including the ones he did early in his career under different pen names.
Posted by Elgin Bleecker at 5:14 PM 2 comments:
Labels: Georges Simenon, Mairgret Has Scruples 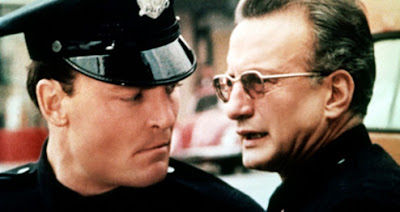 A 49-year-old cop movie that holds up pretty well is “The New Centurions,” based on Joseph Wambaugh’s first novel.

George C. Scott stars as Kilvinski, a veteran patrol officer reaching retirement age whose personal life is empty. While he is weary of life on the street, it is the only thing he lives for.

But the story is really about Roy, who in the film goes from a rookie, under the guidance of Kilvinski, to a veteran, and whose life is going in the same direction as his mentor’s. Roy is played by Stacy Keach.

In the wake of current events, it is interesting to see what policing looked like five decades ago – from the attitudes, to the rogue events, to the simple things like the lack of body armor.

One scene that jumps out was when the veteran and the rookie stop a black truck driver on a minor infraction and the situation escalates. The truck driver was played by Roger E. Mosely (who went on to co-star on TV’s “Magnum, P.I.”).

“The New Centurions” was directed by Richard Fleischer, who had a long career and may be forgotten or underrated today. The script was by Sitrling Silliphant and possibly an uncredited Robert Towne. Also in the film were Jane Alexander, Scott Wilson and Erik Estrada.