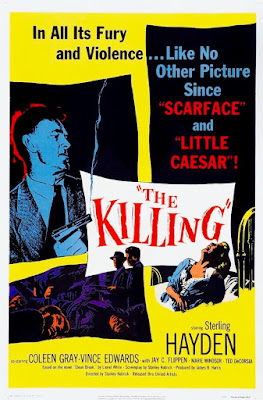 All three star tough-guy Sterling Hayden. Two are heist movies in which Hayden plays one of the robbers.

In Stanley Kubrick’s “The Killing” from 1956, he is the leader of a 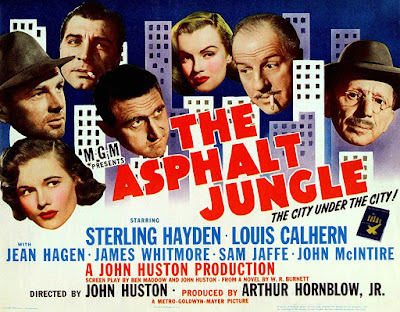 crew out to rob a race track. The picture was based on a Lionel White novel.

In John Huston’s “The Asphalt Jungle” from 1950 and based on a W.R. Burnett novel, he is the muscle protecting the master-mind of a jewelry store heist.

All three are well worth the time.

If you miss any or all of them, sign up for Watch TCM, the Turner Classic Movies streaming site. Most films shown on TCM land on the site a few hours later and stay there for a week or more. The streaming site is free with your cable subscription.
Posted by Elgin Bleecker at 8:46 PM 1 comment:
Labels: crime, Crime Wave, Film noir, heist, John Huston, Kubrick, Sterling Hayden, The Asphalt Jungle, The Killing, Turner Classic Movies
Newer Posts Older Posts Home
Subscribe to: Posts (Atom)