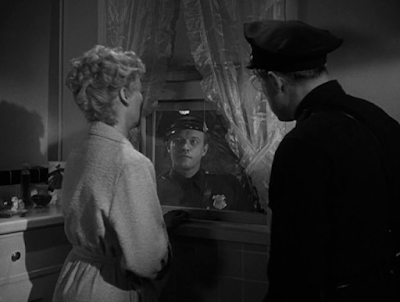 “The Prowler,” a rarely seen noir film from 1951, is the story of a corrupt, immoral and dangerous Los Angeles cop, played by Van Heflin, who starts an affair with a suburban housewife, played by Evelyn Keyes, and together their passions run out of control.

Heflin by this time was a movie star who had played villains in supporting roles and anti-heroes in noir films like “The Strange Love of Martha Ivers,” and here he projects sleazy depravity from his first scene in which he responds at a report of a prowler at Keyes’s home.

Heflin’s character – a former jock and high school hero – is now an ordinary patrol cop who believes he deserves more from life and that he has the right to take what he wants. His badge and gun give him the power to threaten and intimidate others. When Heflin and his patrol-car partner are sent to the home of Keyes, we see that he is a predator. As his partner talks to Keyes at her front door, Heflin walks right into her living room and starts checking out personal items on a desk. This man cannot be trusted. He is up to no good. 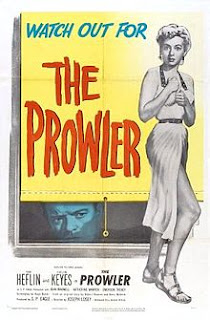 By coincidence, he and Keyes know each other. They grew up in the same town. She had a crush on him. He moves in on her and is not rebuffed as Keyes is unhappy in her marriage to a successful radio personality. This is typical of film noir, but several things stand out to make “The Prowler” a very different kind of film. First, few if any cops in movies of that time were depicted as corrupt and immoral. Second, the film takes several turns making the plot unpredictable.

Unlike many noir films which start in the calm, placid daylight of post-World War 2 America and grow darker as the story does, “The Prowler” starts in the night and grows lighter, leaving the characters in the bright sunlight where there is no place to hide.

The film has many subtle elements to set an audience on edge, things like the oddly long hallways in Keyes’ suburban house, through which the characters move, creating an uneasy feeling.

“The Prowler” was directed by Joseph Losey, who right after making this film fled HUAC (the U.S. Congress’ communist witch-hunting House Un-American Activities Committee) and went to England where he remained and directed many good films including “The Servant.” In “The Prowler,” Losey presents most of Heflin’s and Keyes’ scenes in long, unbroken takes, displaying the skills of two very good actors. The tension Losey creates is never broken for the length of this 92–minute movie.

The movie’s screenplay was by black-listed Hollywood writer Dalton Trumbo, who at that time was still turning out scripts, but submitting them to producers by having friends put their names on the cover pages. Several years earlier, Trumbo and a handful of black-listed film people refused to provide HUAC with names of suspected Communists and all were sent to prison for contempt of Congress. He and the other nine were dubbed “The Hollywood Ten.” Trumbo’s problems with HUAC are the subject of a new movie, with Bryan Cranston (of “Breaking Bad” fame) playing him.

“The Prowler” was produced independently by Sam Speigel, through Horizon Pictures, the company he owned with director John Huston. Evelyn Keyes at the time of this movie was newly divorced from Huston.

The sleazy story of a corrupt cop sounds like the work of crime writer James Ellroy, but predates his book L.A. Confidential by nearly 40 years. Ellroy said “The Prowler” is one of his favorite films. When author Eddie Muller, head of the Film Noir Foundation, heard that, he tapped Ellroy for money to help restore the film, and Ellroy came through. 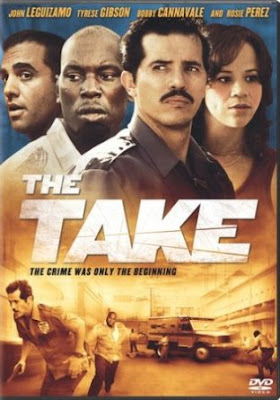