Having now watched two Netflix miniseries created by suspense author Harlan Coben, I have a question:

Is it OK, after six hours of damn good, suspenseful entertainment, if the conclusion of a story does not completely add up?

The two shows that my wife and I enjoyed, but some friends had problems with, are “Safe” and “The Stranger.”

In “Safe,” a man who recently lost his wife and is struggling to raise two teenage daughters is thrown into a panic when his older daughter goes over to a friend’s house and never returns. The mystery is what happened to her. What the man finds out in his search complicates everything and shows the safe, gated community in which they live is not safe at all.

Without giving too much away, the first thing the man finds out is that the girl did not go to her friend’s house, but to a wild party at the house of another girl whose parents were away. The man struggles to wring the truth out of the teenagers and their parents, who are all caught up in covering their own asses, never mind that a neighbor’s kid has disappeared.

In “The Stranger,” a young woman approaches a man at a sporting event and tells him some things about his wife no one else could know. The man starts to question, doubt and suspect his wife has been telling him lies. The young woman does the same thing to other people and seems to enjoy watching their lives come apart.

Who is she and how does this stranger know these things? No spoilers here.

There is a massive paperback called The Big Book of the Continental Op with all (or most of) Dashiell Hammett’s short stories featuring his investigator for the fictional Continental Detective Agency. Hammett never tells the reader the Op's name.

Editors Richard Layman and Julie M. Rivett collected all the Op stories Hammett published from October 1923 to November 1930 in the pulp magazine Black Mask. The book includes the original, serialized stories Hammett later rewrote, edited, and published as the novels, Red Harvest and The Dain Curse. Aside from correcting typos and adding footnotes to explain the slang Hammett used, the editors presented each story as it first appeared nearly a century ago.

The first yarns I read (reread, actually) in the collection were two early linked stories published in 1924, “The House in Turk Street” and “The Girl with the Silver Eyes.” Unlike the ones that became the novels, these two do not have to be read in order. I know, because I read them out of order decades ago, and again this summer.

Chronologically, “The House in Turk Street” comes first. In it, the Op, a 35-year-old, heavy set (he called himself fat in his first person narration of the stories), detective is doing the legwork for a case by going door to door, asking residents of Turk Street if they have seen a certain man reported to be in the neighborhood. 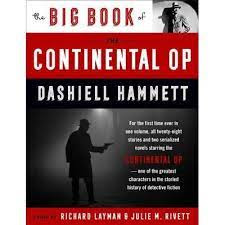 At one door, an old couple invite him into their house and fritter away his time in a scene that is almost comic until a man with a gun enters. It is not the man the Op is searching for, but is the leader of a small band of thieves who are hiding out in the house. The man, along with an ugly thug, a beautiful young woman, and the old couple, have pulled a heist of bonds.

The bonds are in a bag and each of the gang members wants the bag for himself. Each is willing to deceive, double cross, and even kill the others to get it. While their greed occupies them, the Op is able to free himself and get away, but not before guns go off, people get shot, and the bonds go from hand to hand.

While the plotting and the amount of violence in the story may have been what Black Mask required, Hammett through his life experience and his ear for natural sounding dialogue, elevates the story.

“The Girl with the Silver Eyes” is a much longer and less confined story which Black Mask promoted as a novelette.

In it, the son of a rich man wants the Op to find his girlfriend who has disappeared. The Op gets to work and soon learns the beautiful woman skipped out with $20,000 the young man gave her. The guy does not care about the money – which was not all his – he just wants the woman he loves to come back.

The Op does his job, and Hammett lets the reader in on some of the techniques detectives used to track people. For instance, the Op walks over a newspaper office, looks up the weather reports for the last month, notes the days it rained, goes to the taxicab companies and asks them to look for any record of fares on those days going to or from the woman’s apartment building.

“The Girl with the Silver Eyes” is a story with a lot of local color as the Op works his way around town winding up at a night club and gambling joint. Hammett’s observations of the gamblers, the club owner, the cheats, snitches and other assorted creeps, is great fun to read.

My only complaint with it was the use of a corny device to allow the baddies to escape and plunge the Op into a rip-roaring car chase near the end.

The realism of Hammett’s Continental Op stories comes out of the author’s experience working for the Pinkerton National Detective Agency. While the stories stand up pretty well, they were the training ground for one of the best detective novels ever written, Hammett’s The Maltese Falcon.