Today is the first day of the 10-day We Are One: A Global Film Festival.

Check the schedule pages for the films and the days and times they play.
Posted by Elgin Bleecker at 1:16 PM No comments:
Labels: We Are One Global Film Festival 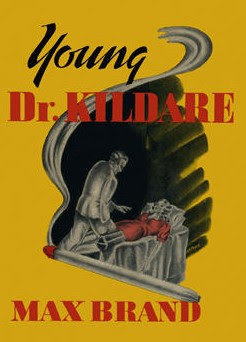 Two years after publishing a short story about a young medical doctor (reviewed here), Max Brand wrote a full novel about the character.

Young Dr. Kildare was serialized in Argosy in 1938, and came out as a book in 1940. It is the beginning of the story of James Kildare. It is both a chronicle of his first days on the job and the mystery he needed to unravel to save a patient.

The novel opens with the new doctor returning to his family home in New England where his parents have prepared an office for him. They expect him to begin his practice side by side with his father, the town doctor.

But young Kildare has other plans. At first he does not discuss them for fear of disappointing his parents. He does not want to be a small-town doctor. He wants to go into a prestigious intern program at a city hospital.

One night, he tells this to a local girl he grew up with and who is in love with him. Here, the bright young doctor seems a little dense. Not only does he hurt her, but also strings her along.

In his first few days on the job, he angers the head of the hospital. He also ticks off brilliant but ornery old diagnostician, Dr. Leonard Gillespie.

Kildare’s first assignment is ambulance duty. On a call, he saves a young woman who attempted suicide. The stodgy old doctors want to confine the girl as a dangerous mental patient. But Kildare discovers she has a guilty secret. He refuses to break his word to the girl by revealing what she told him. For this, he faces dismissal from the hospital. The young doc defies everyone and goes out to investigate the true story behind the girl’s secret.

Turns out, the girl fell in with some artists, one of whom got her stoned and, she thinks, took advantage of her. This may have been hot stuff in 1938. It was evidently too hot for MGM. When the studio made the film, “Young Dr. Kildare," it eliminated the drug angle completely.

Kildare solves the mystery of what actually happened to the girl and restores his own position in the hospital. He also earns the respect of Dr. Gillespie by correctly diagnosing the old man’s cancer (and without blood tests and scans – this is one hell of a doctor). Gillespie takes Kildare on as his assistant and pupil and everyone is happy – except the girl he left behind in the little town.

All this sounds like pretty corny stuff – and it is – but Young Dr. Kildare is an enjoyable read.

There are plenty of problems with story but I will leave them all alone except one. Brand did not handle the suspense well. When Kildare receives an important clue about the girl’s secret, he does not fly into action, but mopes about for a while.

Unlike some other Max Brand books I have read, his dialogue here is not too bad and he tells his story in a light, breezy style.
Posted by Elgin Bleecker at 1:16 PM 2 comments:
Labels: Max Brand, Young Dr. Kildare

In the 1930’s, Max Brand, prolific author of Westerns, started a modern series. It featured James Kildare, a young doctor working as an intern at a large city hospital.

The Secret of Dr. Kildare, the third novel in the series, sat unread on my shelf for years. I took it down recently when looking for something light to read. It did not grab me. But it did send me looking for the origins of the Kildare series.

Brand introduced Kildare in “Internes Can’t Take Money,” a short story in the March 1936 issue of Cosmopolitan . It is in The Collected Stories of Max Brand.

“Internes Can’t Take Money” is far from a great story, but it has some good things in it. The best thing is the character of bright, strong-minded Kildare who will bend hospital rules.

Most of the story does not take place in the hospital but in a nearby saloon in the tenement section of the city. Kildare patches up a thug wounded in a fight. A local tough guy insists on giving the doctor a lot of money for his work and for not reporting it. Kildare refuses the money. Instead, he convinces the man to put it to better use, paying off the gambling debts of a fellow doctor.

Brand was an expert at moving a story along. But some of his story strains credulity. For instance, Kildare, alone in a crummy apartment, performs a difficult operation.

In a 1934 letter, quoted in The Max Brand Companion, he called his writing “improvisation rather than composing.” I like that. It sounds like jazz.

Missing from this short story is the brilliant, cranky and demanding head of diagnostic medicine, Dr. Leonard Gillespie. He shows up in future stories.

Brand is far from my favorite author. But his first novel in the series, Young Dr. Kildare, hit a homerun with me. Next time, I will post about that book.
Posted by Elgin Bleecker at 1:58 PM 2 comments:
Labels: Dr. Kildare, Max Brand

“Searching” is a suspense film to see 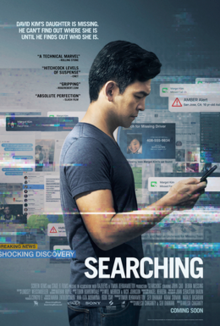 “Searching,” is a film that did not get many rating stars on our cable channel guide, but whose description sounded intriguing. It turned out to be pretty good movie.

John Cho plays a single dad whose teenage daughter never came home from a friend’s house. He contacts the police and the investigating officer, played by Debra Messing, urges him to go through the girl’s social media and contact her friends.

The idea of a missing child almost always works in a suspense picture, but “Searching” adds an element – some might call it a gimmick. The entire movie plays out on a computer screen. That sounds extremely limiting, but director Aneesh Chaganty keeps it all moving and interesting.

If you get the chance to see “Searching,” ignore the critics and give it a try.
Posted by Elgin Bleecker at 9:27 AM 2 comments:
Labels: Debra Messing, John Cho, Searching, suspense film
Newer Posts Older Posts Home
Subscribe to: Posts (Atom)