"Collateral" is a series to watch 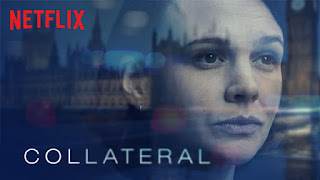 A pizza delivery man is shot down in the streets of London, but not robbed. The killing was a hit carried out by a professional. But who would want this young guy killed?
That is the question a police detective, played by Carey Mulligan, wants to answer in "Collateral," a four-part British mystery series written by David Hare.
The man killed was an Iraqi refugee. He was delivering a pie to the kooky ex-wife of a Member of Parliament. A stoned young woman sitting unseen on a step caught a glimpse of the shooter. But she does not want to be involved for fear of exposing her private life. Something is up with the woman managing the pizza place who sent the man on the delivery.

The links to the crime are murky and varied.
Posted by Elgin Bleecker at 4:12 PM 1 comment:
Newer Posts Older Posts Home
Subscribe to: Posts (Atom)