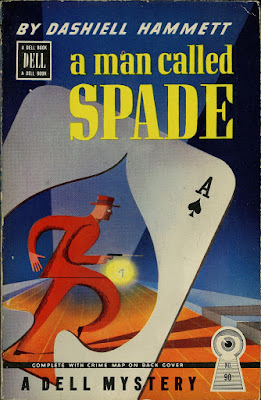 A Man Called Spade is a collection of five short stories by Dashiell Hammett, three of which feature his private detective Sam Spade – or as Hammett always calls him – Samuel Spade. (Interesting that Hammett’s first name was Samuel. His middle name was Dashiell.) Hammett introduced Spade in his 1929 novel, The Maltese Falcon.

In “A Man Called Spade,” the first story, Spade gets a call from a man who says he is being threatened and wants Spade to come to his home right away. When Spade arrives the man is dead and the police are there, including Detectives Polhaus and Dundy, who were also featured in The Maltese Falcon.

Spade behaves as an equal and a professional around the cops. He is friendly with Polhaus, but at odds with the older detective, Dundy, who outwardly shows his dislike of Spade. Spade maintains a quiet, professionalism. Hammett lets the reader know how good he is under pressure, at a murder scene or facing a potential killer, by briefly noting how Spade rolls his own cigarets. When things heat up, Spade will spring into action, moving very fast.

In short order, a series of characters, any of whom could be the killer, are introduced and questioned by Spade and the cops. In about 50 pages, Spade figures out whodunit.

Hammett’s trademark style of lean, hard prose and clipped, realistic dialog are there on every page of the three Spade stories. Like Ernest Hemingway, Hammett found that what he left out was as important as what put into a story. A nice example is the opening of “They Can Only Hang You Once,” the second story in the collection:

With those two spare lines, Hammett paints a vivid picture. Spade is at the front door of the mansion of a wealthy, probably elderly man, and he is pulling some kind of ruse to gain entry to the house. Hammett says all that without saying it.

In this story, Spade gets involved with the murder of a relative of the old man and one of the house servants. They die due to a secret the old fellow is hiding and which Spade discovers.

In the third story, “Too Many Have Lived,” Spade gets in the middle of a blackmail scheme and butts heads with some other baddies looking to cut themselves in on the payoff.

All three of the Spade stories are – I hate to say it – a little thin and give the impression that Hammett was resting on his laurels and dashing off puzzles for quick money. The stories appeared in magazines in the early 1930s, before being collected in this book.

The fourth story, “The Assistant Murderer,” does not feature Sam Spade and is a long, fairly dull procedural featuring an uninteresting detective.

The book is saved by the last story, “His Brother’s Keeper,” which was quite good and written in a different style. Through first-person narration, the story is told by a very young boxer at a crucial point in his budding career. His older brother is acting as his manager, even though the brother does not seem to know much about training or arranging bouts. But the boy trusts him to the point of being blind to the deals the brother is making. The tragic ending is touching, and that is unusual for the usually cool Hammett.

All in all, this 1944 Dell paperback was a treat to read. Even if the tales were not as good as his earlier work, just being in the world of Hammett was well worth the time spent.