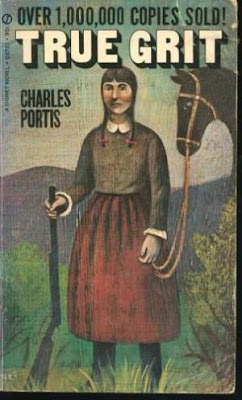 The 1968 novel True Grit is a remarkable book on all levels: story, character, dialogue and overall sense of place.

Mattie Ross, the first-person narrator, is telling her story from a distance of 40 or 45 years, and looking back to events that happened around 1880 when she, an intelligent, assertive girl of 14, sets out to catch the killer of her father.

Frank Ross left the family farm in rural Arkansas to go to Fort Smith to buy horses. He took along a farm hand called Tom Chaney. Chaney got drunk one night and shot Frank and then ran off to hide in Oklahoma, at that time called Indian territory. There he joined a gang of outlaws lead by Lucky Ned Pepper.

In Fort Smith to claim her father’s belongings, Mattie seeks help in tracking down Chaney. She needs a federal marshal since only he has the authority to make an arrest in the Oklahoma territory. The lawman she wants to help her is the gruff, middle aged Rooster Cogburn, a man with “true grit.”

Mattie and Rooster, along with a Texas Ranger who is also looking for Chaney, set out on their journey. Portis’ descriptions of the territory and the people in it, all through the voice of Mattie, depict a rough, untamed land with few inhabitants.
At times the narration and dialogue are formal. I believe it was Portis’ way of recreating the past, a past he himself could not have known since he was born in 1933. Perhaps he was recalling the way some of the old folks of his native Arkansas spoke when he was a boy. Perhaps it was the way accounts of the 1880s were reported in books and newspapers. Whatever it was, it was an effective technique.

Here is an example:

While dickering with Mattie, a horse dealer named Stonehill says, "I would not pay three hundred and twenty-five dollars for winged Pegasus…”

And later, when she tells him she is going to Indian territory with Rooster, he says, “Cogburn? … How did you light on that greasy vagabond?”

In her dealings with people, Mattie often comes across as a know-it-all, but she is usually right. That and her strong will make her a memorable, if somewhat annoying, character.

Was she always right? Is her memory of events the truth? Or is Mattie an unreliable narrator? True or not, it is her story and she is telling it in an interesting and compelling way. Mattie, a fairly humorless narrator, does recall some funny dialogue, as when after getting the best of Stonehill, he sees her the next day and says, “I just received word that a young girl fell head first into a fifty-foot well on the Towson Road. I thought perhaps it was you.”

And later, when she is in the Oklahoma territory, Rooster meets an Indian police officer and friend. The two men are razzing each other when Mattie pushes in to introduce herself saying, “Perhaps you are wondering who I am.” The officer says to the young girl in the oversized getup, “Yes, I was wondering that … I thought you were a walking hat.”


Near the end, Rooster Cogburn proves that while he likes to drink and collect cash rewards on wanted men and fudge his expense accounts, he really does have true grit. Squaring off alone against Ned Pepper and some of his gang, he calls out, “I mean to kill you in one minute, Ned, or see you hanged in Fort Smith at Judge Parker's convenience! Which will you have?”

Pepper laughs at him and says, “I call that bold talk for a one-eyed fat man!”

To which Rooster replies, “Fill your hand, you son of a bitch!” and rides at him.

If some of this dialogue sounds familiar, it is because the 1969 movie produced by Hal B. Wallis and directed by Henry Hathaway, with John Wayne as Rooster and Kim Darby as Mattie, lifted a lot of it directly out of the book. I don’t know if the 2010 Coen brothers’ movie used any of it, because I never saw that one. But that is a post for another day.