“Beirut” is a Movie to See 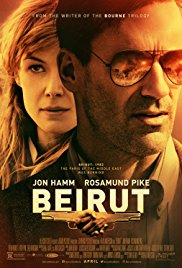 Starting in Beirut, Lebanon, in 1972, the film opens with Mason Skiles (played by Jon Hamm), an American diplomat, hosting a party at his beautiful home, when terrorists strike. Skiles’s wife is killed in the attack.

The story then jumps forward 10 years, finding Skiles in the U.S., a labor negotiator by day and a booze hound by night. While knocking back drinks at a local watering hole, Skiles is approached by a man he knew during his foreign service days. The man has a proposition, fly to Beirut and give a lecture at a university and earn a tidy sum for not much work. Of course there is more to this proposal. American officials in Lebanon want Skiles to negotiate for the return of an American who was snatched off the streets of Beirut. The kidnapped man was a friend back in the day, but returning to city of his nightmares tears at Skiles.

“Beirut” is a well-made spy thriller with good performances from Hamm, Rosamund Pike as the person assigned to handle him during the job, and the rest of the cast.

The smart, complex script is by Tony Gilroy, and the direction by Brad Anderson.

This film is not going to attract huge audiences of teens and 20-somethings and may not last long in theaters. So try to catch it on the big screen before it disappears.
Posted by Elgin Bleecker at 12:51 AM
Labels: Beirut, Brad Anderson, Jon Hamm, Rosamund Pike, Tony Gilroy