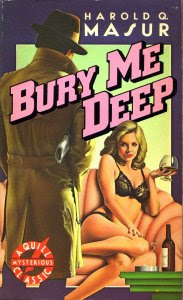 New York City lawyer, sleuth and sometime tough guy Scott Jordan, the hero of a dozen books by Harold Q. Masur, was first introduced in the 1947 novel Bury Me Deep.

The year 1947 also saw the publication of Mickey Spillane’s I, The Jury, which introduced Mike Hammer. Masur may have been influenced by Spillane, or perhaps he was just writing to the tastes of the times.

While crafting a Perry Mason-like mystery, Masur peppered his story with sexy dames for Scott Jordan to encounter and a few thugs for Jordan to square off with. But Masur falls short of matching either Spillane or Erle Stanley Gardner.

The story begins with a scene that could be the first line of a joke. Jordan opens his apartment door to find a beautiful, nearly naked woman reclining on his sofa. The girl soon winds up dead and coincidentally turns out to have been a witness in a big inheritance case.

There are a lot of coincidences in Bury Me Deep. Too many.

Harold Q. Masur (1909-2005), was a lawyer, but unlike Gardner, did not give Scott Jordan nearly the legal acumen or cunning personality of Perry Mason, nor was Jordan as tough and entertaining as Spillane’s detective.

Bury Me Deep is a book I looked forward to finding and reading, but, instead of going on, I will send you over to others who enjoyed Masur’s work a lot more than I did, and you can read their takes here and here.
Posted by Elgin Bleecker at 12:12 AM
Labels: Bury Me Deep, Harold Q. Masur, Scott Jordan